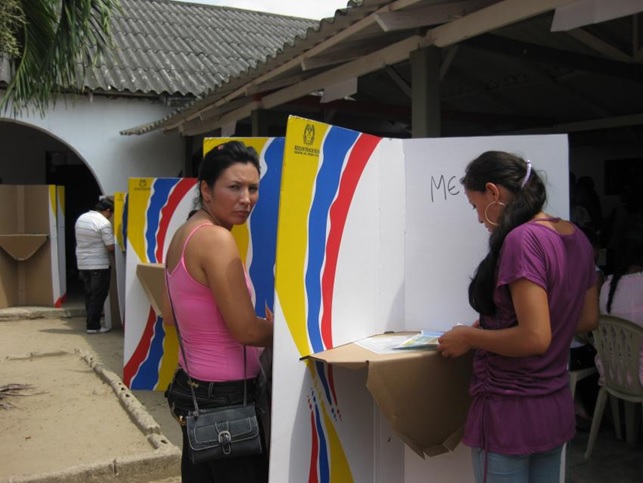 Can cash transfers lead to higher voting turnout? Some weeks ago, I shared evidence from the US attesting that cash transfers increase political engagement and voting among Native Americans. New evidence from Colombia’s Familias en Accion corroborates such finding – with a stronger effect among women: an upcoming article by Conover et al estimates that the receipt of Familias has a positive effect in the probability of casting a ballot (at the 2010 Presidential elections). For women, this corresponds to a 2.8% increase in the average turnout rate, while for men such increase is 1.5%. Familas women were also more likely to vote for the incumbent party candidate (who supported the CCT).

The earlier the better: a forthcoming EDCC article by Sanchez et al examines the nutritional and cognitive impact on children of the Peruvian Juntos CCT program. Their model distinguishes between kids from ages 0 to 4 and those between 5 to 8: as per design, the younger cohort receives a higher dose during early-life critical windows, with additional preschool nutritional monitoring and vaccination components. So what did they find? Exposure to Juntos for the younger group reduced stunting by 8.9 percentage points and cognitive functions (i.e., vocabulary ability as measured by Peabody test scores) by 0.2 standard deviations. In contrast, no impact is detected for the other siblings who started receiving the treatment when older.

Speaking of nutrition, let’s discuss more human capital issues: Wagstaff et al have an insightful overview of the 2018 database on Health Equity and Financial Protection, which includes indicators the delivery of health services, health outcomes, and financial protection. Glaeser and Lu have a Vox piece explaining that Human capital externalities amplify the returns to education in China, but this can only explain some of the country’s rapid growth (if that were the case, education returns should have been even larger).

There is lots of debate on US proposals to expand the EITC – most seem to reach more people with larger benefits, but leave the poorest uncovered… among the commentaries, see Bruenig’s discussion of the ‘trapezoids’ (in reference to EITC’s benefit structure). Speaking of the US, Fremstad and Paul calculate that a carbon tax of $230 per ton of CO2 could fund a universal cash transfer (“carbon dividend”) of $2,237 person/year. And in reference to SNAP (food vouchers), Meyer et al show that surveys understate participation among single parents, non-whites, and low-income households, as well as leading to errors in multiple program participation, time and age patterns of receipt.

A couple of interesting poverty assessments. A DPR article by Turok et al quantifies the probabilities of upward mobility among people living in different places in South Africa (see fig 2, p.711 for a nice illustration): if you are in extreme poverty in a formal urban area, the chances of escaping poverty are more than twice that of those living in rural areas. Indeed, in the former case, nearly 1 out of 4 people that were poor in 2008 managed to escape poverty by 2012. Conversely, only 1 out of 10 did so in rural settings. The prospects for people in informal settlements were in between, with 1 out of 7 seven poor people escaping poverty over those 4 years. Who are the most vulnerable among Syrian refugees in Jordan? It can be challenging to detect significant differences among people in need, but sometimes these can clearly emerge. By combining UNHCR’s ProGres data with household survey data, a working paper by Hanmer et al sheds light on refugee households whose principal applicant is a woman. They find that about 93% of female principal applicants either have an absent spouse or no spouse at all (only 31% of males are in this situation). Most female principal applicants (55%) are single caregivers, have more children, and have less access to daily and irregular work than comparable males. Unaccompanied children also emerge as a highly vulnerable group.

Since I mentioned jobs, let’s examine other work-related resources. Gill has a lively summary of the challenges to estimate the effects of minimum wages, including glaring diverging findings on the same intervention. A new NBER paper by Rodrik on technology, manufacturing and value chains in low-income countries. The basic point is the following: these countries’ labor cost advantage is offset by their technological disadvantage. This is because technology is generally biased towards skills and other capabilities that reduce the edge in traditionally labor-intensive manufacturing and decrease gains from trade. This also reduces the ability of low-income countries to substitute unskilled labor for technology. What to do? Among the recipes, he suggests to focus less on international economic integration and more on the domestic economy’s fundamentals, such as via better human capital and governance. Another side of technology is laid out in a CGD note by Ng’weno and Porteous, which argues that African digital platforms offer a progressive onramp to formalization (“… it’s time we recognized the truth about the future of work in Africa: it isn’t in the growth of full-time formal sector jobs”). Bonus on growth: the classic debate on convergence, i.e., whether the gap between high and low-income countries is closing, is reaching new heights – Johnson and Papageorgiou argue there is no progress in closing such gap, while Subramanian et al point out just the opposite.

Final mix! In reviewing the interesting book by Mei Chang, a Brookings piece by Ingram points out that “… success in the private sector is built on taking risks and learning from failure. In Silicon Valley, failure is valued and even glorified. In contrast, in the social sector (and government) risk and failure are to be avoided at all costs, which stymies innovation and the ability to tackle the underlying causes of social problems”. Could cash transfers be the catalyst for the national roll out of IDs?  Could e-money be leveraged to access essential services? Langhan reflects on these and other questions on financial inclusion. Working on DRC? You may be interested in this 3-day ODI event entirely dedicated to the country’ development issues and practices (Nov 5-7).