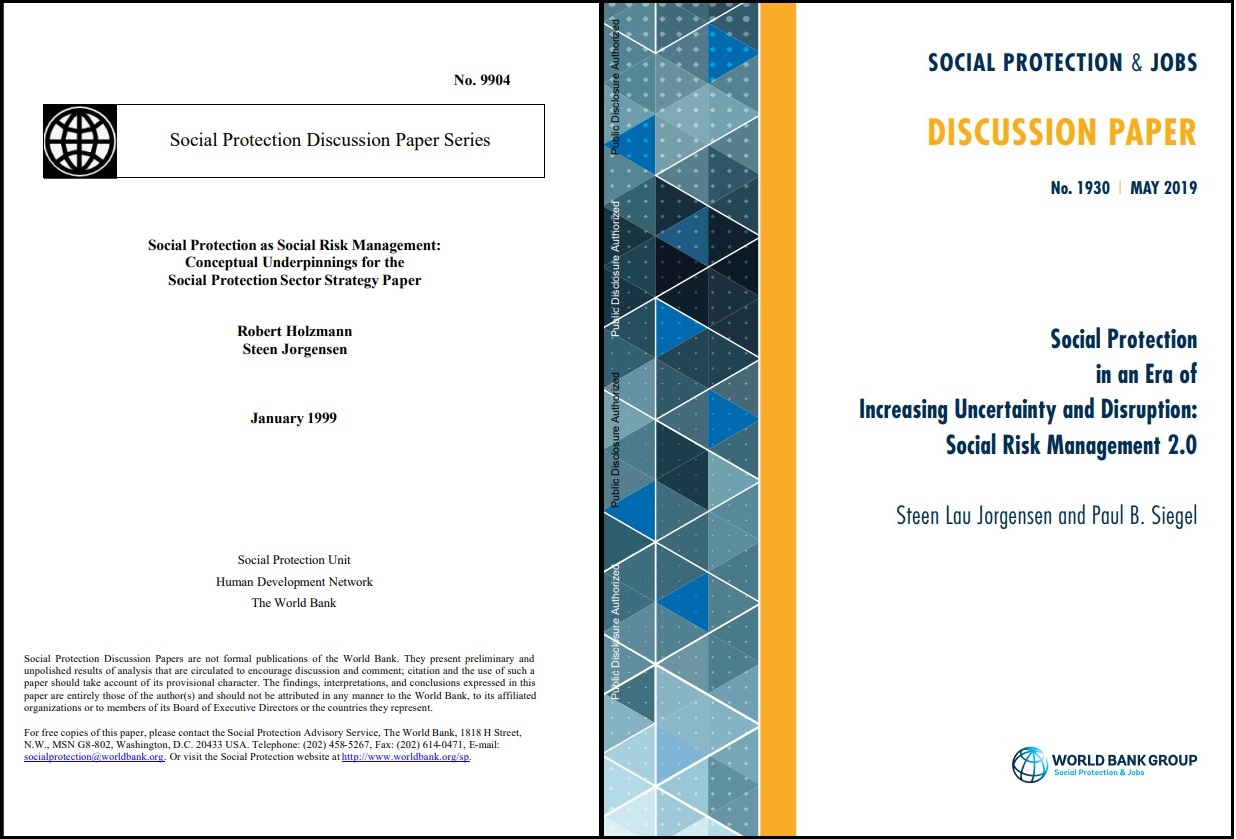 The concept of Social Risk Management, enshrined in a seminal 1999 discussion paper by Holzmann and Jorgensen, has been a defining framework in modern social protection thinking. Twenty years into its release, Jorgensen and Siegel bring new life to the concept by unveiling SRM 2.0. In 150 pages, they revisit the evolution in concepts and definitions; set out a narrative within ongoing tectonic changes in technology, climate, and labor markets; they look at ways to reconcile risk and rights-based perspectives; and lay out a range of policy implications and ideas, including in terms of asset approaches, inclusive targeting, and global social protection provisions.

From concepts to practice: reforming energy subsidies are among the key financing sources for social assistance, but can digital technology help implement those transitions? A brilliant CGD piece by Gelb and Mukherjee reviews lessons from Bolivia, Nigeria, Iran and India. For each case study, they discuss the context of reform, awareness and consensus-building around it, the reform’s design and cash transfer (or public works) compensation, and implementation aspects (see also their neat framework on p.10). They conclude that digital IDs and payments are neither necessary nor sufficient for reform (“… technology […] does not, in itself, create the political drive and constituency to push reform forward”); but they can be useful when other conditions of the framework are in place (a summary blog is also available here).

Can national and international assistance be combined to support refugees? Yes, they can! Cuevas et al take us to a fascinating tour of Turkey’s Emergency Social Safety Net (ESSN) program, a scheme delivering cash transfers the poorest 40% of 4 million Syrian refugees. The program is funded by the European Union, and implemented by the government, WFP, and Turkish Red Crescent (blog here). Among the report’s findings, transfers constitute 51% of households’ pre-transfer expenditures; also, for people that were deemed vulnerable but didn’t strictly meet the targeting criteria (which was the case for 23% of the caseload), “discretionary allowances” could be provided by local government offices after a household socioeconomic assessment.

Speaking of humanitarian issues… the annual Global Humanitarian Assistance report will be released in September, but here is a sneak preview by Development Initiatives: among the factoid, in 2018 international humanitarian assistance amounted to $28.9 billion, a 1% increase from 2017. While most traditional donors reduced their contributions, Gulf countries stepped up – the United Arab Emirates increased their donations by $1.7 billion, while Saudi Arabia’s by $806 million. Among recipients, Syria, Yemen and South Sudan captured 30% of global assistance. Bonus: does the Grand Bargain signed in 2016 need rethinking? Read and listen views from a panel.

Shifting to food security and nutrition, another flagship will be released next Monday (July 15) by the Rome-based UN agencies, the State of Food Insecurity in the World 2019, while Haddad has an interesting blog on old and new perspectives on business engagement in nutrition.

What’s new on gender? A piece by Clark et al shows that in Kenya’s slums, women who were offered vouchers for subsidized early childcare were, on average, 8.5 percentage points more likely to be employed than those who were not given vouchers (h/t Amber Peterman).

Turning to Asia, an article by You and Nino-Zarazua examines the intergeneration wealth effects of China’s New Rural Pension Scheme, showing that the program has mainly benefited the better-off.

Plenty of resources on inequality! The ILO estimates that 10% of workers receive 48.9% of total global pay, while the lowest-paid 50% of workers receive just 6.4% — furthermore, the lowest 20 per cent of income earners (around 650 million people) earn less than 1% of global labor income, a figure that has hardly changed in 13 years (see new ILO dataset on labor income shares). Palma’s new fascinating paper develops a new approach for examining and measuring inequality (distance from distributive targets) and a concept of ‘distributional waves’. Another WD piece by Jorda and Nino-Zarazua Argues that bias from omitting the rich in global inequality estimates is considerable (in the order of 11% and 39% using the MLD; 3% and 16% using the Theil index, and 2% and 8% using Gini). Bonus: a wealth tax can be tried, says Noah Smith.

More on missing people from data: a briefing paper by CECGP highlights the issue of not incorporating children in surveys (h/t Keetie Roelen).

Finally, the NBER paper by Bursztyn et al raised a wave of criticism around the ethics of the experiment (which encouraged Hong Kong university students into participation in an anti-authoritarian protests). And a paper by Bailey et al shows that social networks in urban areas of NYC are developed along transit routes, and that those with better access to public transportation develop friendships across the city.