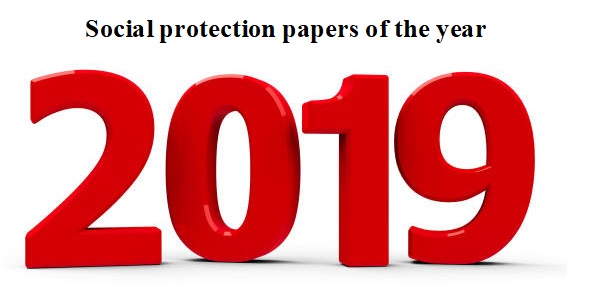 It has been a very exciting year for social protection! In 2019, this newsletter reviewed 1042 materials in 43 editions. So here is a personal selection of papers articulated around 10 major themes. Links are

1. Economic and other long-term effects

Blattman et al show that after 5 years, a one-off cash grants in Ethiopia has fading effects. Similarly, in Malawi Baird et al estimate that the impact on reduced fertility of an unconditional cash transfers on adolescent girls rapidly vanished.

In Mexico, after 20 years of operations cash transfers ex-beneficiaries showed higher ownership of durable assets (Aguilar et al); 49.2% of them experienced upward mobility (Yaschine et al); they grew 2.8-4.1cm taller and have 5.3-5.7 more years of schooling than their parents (Gutierrez et al), with enrollment in secondary school increasing by 5-10 percentage points over grades 7-12 (Behrman et al). A 10-country review by Millan et al found that the evidence is strong on school completion, more mixed on learning, and limited on employment. Another paper by Millan et al estimate that 13 years after its inception, transfers in Honduras increased secondary education completion by 50%, but also rose the chance of migration by 3-7 percentage points.

In Ecuador, Moncayo et al show that a 1% increase in the coverage of cash transfers decreases mortality from malnutrition by about 3%. In Nigeria, Okeke and Abubakar estimate that cash reduced mortality of children in utero by at least 20%. Celhay et al found that cash increased the survival rates of birth cohorts exposed to the program by up to 14.7%. and Dow et al find that in the US, a 10% increase in the Earned Income Tax Credit or in the minimum wage reduces suicides between 3.6 and 5.5%.

In Ghana, Gelli et al found that the national school meals program improved stunting among children of 5-8 years (effect size: 0.12 standard deviations). Neufeld et al on the history of nutrition evidence on cash transfers in Mexico. And a paper by Evans and Yuan shows that girl-targeted versus general interventions in education seem to deliver similar gains, including features cash transfers both at the top and bottom among the most effective interventions.

A review of evidence on social assistance and intimate partner violence (IPV) by Hidrobo and Roy shows reductions in physical violence between 25-41% in Bangladesh, Ecuador, and Mali. Another brief by Heise summarizes results from 22 studies across 13 countries.

Tuttle shows that banning convicted drug felons from SNAP food stamps in the United States makes them more likely to return to jail. Sviatschi estimates that in Peru, cash transfers reduced drug production. And in Brazil, Machado et al find that Bolsa reduced homicide rate and hospitalizations due to violence by 8-25%.

Barca and Beazley estimate that it takes between 2 weeks to 14 months to scale up social protection in response to natural disasters. Bruck et al show that a new generation of 7 high-quality evaluations sheds light on social protection in fragile and displacement settings. Cherrier et al produced an excellent compendium on  humanitarian-social protection linkages, while Seyfert et examine the trade-offs of integrating refugees into national safety nets.

A new book by Gentilini et al offers a framework to navigate the analytics, evidence and practices on universal basic income (UBI), while Banerjee et al discuss how UBI may address barriers like lack of credit, insurance or psychological factors among low-income people. Jolliffe et al show that SNAP, the American “floor for the poorest”, has been sinking over the past 30 years.

ILO and UNICEF have an overview note on “universal” child grants present in 21 countries, while Kidd and Athias offer a critique of proxy means testing. In Indonesia, Tohari et al estimates that the poverty-based unified database of beneficiaries improved the chance of participating in 3 core programs by 117%, while Bah et al estimate that if all households were included in such database undercoverage would be reduced by one-third. Bonus: Ndiaye et al trace the evolution of the national social registry in Senegal.

Packard et al examines how social protection could be adapted to the changing nature of work, while Jorgensen and Siegel unveil social risk management 2.0. Guven shows that in Africa only 10.6% of Africa’s working-age population contributes to pension schemes. The ILO has a fascinating “living document” laying out a number of options disaggregated by occupation.

Hickey et al have an amazing open-access book on the political economy of cash transfers in Africa. Mosec and Mo found that in Pakistan those receiving BISP cash transfers increased support for their political leaders and institutions, while in typhoon-hit Fiji Rios et al show that people receiving cash transfers are up to 20% more likely to be very satisfied with the government than non-recipients. In Brazil and Turkey, Zucco et al show that conditional transfers are only marginally more popular than similar unconditional transfers. Ciminelli et al find that reforms generating large short-term adverse distributional effects are associated with electoral costs for politicians. In Mexico, Cantu documents that cash-vouchers to be used in local supermarkets were provided in exchange for electoral support.

In Bihar, Khemani et al asked whether people prefer cash or other services: only 13% chose cash instead of spending on public health and nutrition; in contrast, if cash came in lieu of improving roads, preference for cash rose to 35% (see counter views). In Mozambique, De Walque and Valente compare the effects of a conditional cash transfer program with the sole provision of information to parents on school attendance: information provision is as large as 75% of the effect of the CCT.

Two papers – one on Ghana by Banerjee et al and another on Uganda by Sedlmayr et al – points to the power of combining cash transfers with assets and complementary measures (as opposed to individual components). Also, Carneiro et al evaluate an integrated cash program for 3,600 mothers in Northern Nigeria: after 2-4 years, the program reduced stunting by 8%. Bonus: Bedoya et al show that a package of transfers and assets in Afghanistan increased consumption by 30% and poverty fell from 82 to 62%.