SP Links Sept 13 — long-run impacts of cash transfers in Mexico and Brazil; cash can save lives in Ecuador; the outlook of safety nets in Burkina Faso; new resources on cash delivery in Somalia and Kenya; public works in the UK; the distributional effects of UBI in the US; inequality and labor market institutions in Latin America; soft skills matter for productivity; urban violence in Congo; and more. 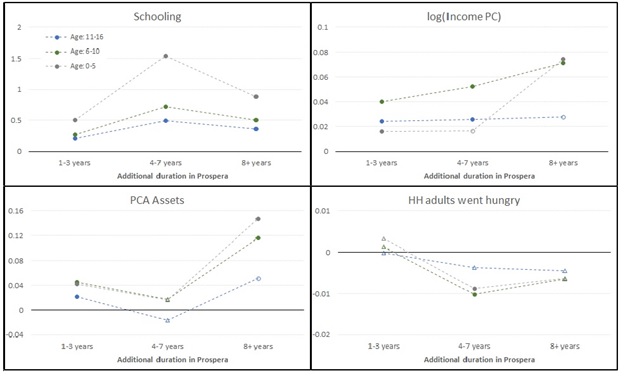 Is there evidence on the effects of safety net programs decades after inception? A rich compilation of 4 technical papers takes stock of Mexico’s PROSPERA conditional cash transfer (CCT) program over 20 years. My headlines are that the program was strong on household assets, nutrition (height) and school enrollment; moderately successful on intergenerational job mobility (whether kids are in better jobs than their parents); and achieved relatively limited gains on learning outcomes. Let’s break down the findings a little further:

What about the other longstanding CCT in LAC, Bolsa in Brazil? Of course, there is new research of its effects over time as well: Ferreira et al have a one-page summarizing the effects of Bolsa over 15 years, although in less detail than above.

But what’s the biggest impact a program can achieve? Saving lives! And can safety nets do that? In Ecuador, Moncayo et al show that a 1% increase in the coverage of Bono de Desarrollo Humano (BDH) CCT decreases mortality from malnutrition by about 3%. Cash also lowered child respiratory infections (-0.8%) and hospitalization rates (-0.2%).

Which African country has more than 100 small safety net programs, 80 of which account for less than 1% of total social assistance expenditures? A rich report by Vandeninden et al reviews the composition, level, and future directions in Burkina Faso’s safety nets. Currently, half of the programs are externally-funded, only cover 2.6% of the population, and do so mostly (64%) with in-kind measures (see also overview here).

Moving to Asia, as mentioned last week the Asia-Pacific Social Protection Week took place in Manila – here is the agenda and link to select streamed sessions (I hope there will be recordings posted!). In Indonesia, a piece on the Jakarta Post discusses pensions coverage and the “sandwich generation”, i.e., the working-age population squeezed between parents and children.

From unconditional to work-based measures: Jordan presents results from his sociological research into the UK’s ‘Work Programme’, a workfare scheme, which he defines as a “… largely pointless… resented by many participants, but providing a basic social service for some others”.

… and from public works to jobs, with 4 fascinating resources (h/t Indhira Santos). An IMF paper by Kugler documents the role of labor market institutions in Latin America where, she argues, the fall in inequality starting in 2002 can be explained in part by a combination of binding minimum wage throughout most of the region and, to a lesser extent, by the introduction of unemployment insurance systems in some countries and the role of unions in countries with moderate unionization rates. Soft skills matter for productivity: Prada et al evaluate a training intervention aimed at boosting leadership and communication skills among employees of a large Latin American retailer. They document large positive effects on store- and individual- level productivity, with the program being more effective in boosting leadership than communication skills. Hunt and Nunn argue that in the US, the share of employment in low-wage occupations is trending up only from 2002-2012, and that the apparent earlier growth (and therefore polarization) found in the literature is an artefact of occupation code redefinitions. Lastly, Deutschmann found that in Africa, the One Acre Fund’s (1AF), an NGO that bundles multiple extension services to small farmers, led to maize production increases by 24% and profits by 16%.

Switching to health, Angell et al have a piece on Ayushman Bharat Pradhan Mantri Jan Arogya Yojana (AB-PMJAY), the Indian reform that seeks to provide financial health protection for 500 million of the most vulnerable Indians and halt the slide of the 50–60 million Indians who fall into poverty annually due to medical-related expenditure. Bonus on health in India, where a sober RCT examines drunken drivers: an NBER paper by Banerjee et al finds that rotating police checkpoints reduced night accidents by 17% and night deaths by 25%, while fixed checkpoints had no effects.

Two very different resources on urbanization: a report by Verweijen discusses urban violence in the eastern Congo, while on a more entertaining note Paul Romer visited ‘Burning Man’, the yearly event in the Nevada desert, to reflect on urban issues.

Finally, happy birthday to socialprotection.org, today celebrating 4 years of age – the platform has undoubtedly improved the world of social protection by making us all more connected and informed.