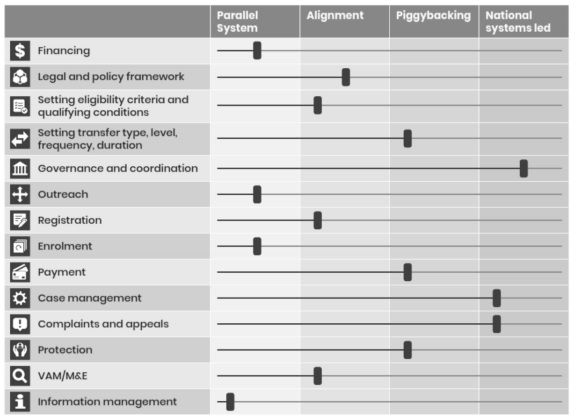 A tough question: how to connect humanitarian assistance for refugees with social protection systems of host (developing) countries? Seyfert et reframe the question of “whether or not to integrate refugees into national systems” and instead examine the scope for better aligning individual delivery functions, explore the degree of such alignment, and discuss the implications of diverse configurations for different stakeholders. Bonus: a 4-page brief by te Lintelo discusses the implementation of humanitarian assistance in urban areas governed by multiple public authorities in Jordan and Lebanon.

Moving to Asia, has social assistance progressed in the East Asia and Pacific region? A new short paper by Barrientos examines the role of social assistance in reducing regional poverty and inequality. Among the interesting findings, was quite impressed by Laos’ coverage performance (see figure 5) and the mixed (and limited) impacts of tax and transfers (figure 6 and 7).

Speaking of inequality, a new African income inequality series was just released on WID, the world inequality database – across Southern Africa (and CAR and Congo), the richest 1% owns between 19-31% of national income (e.g., just like in the US, India, Russia and Brazil).

More on the region, with Tran et al’s new paper on social pensions in Kenya. In particular, they examine the Inua Jamii Senior Citizens’ scheme, a program reaching about 702,000 seniors (>70 years) with $19.7/month (paid bimonthly). Current spending on the program is about 0.13% of GDP in its first year after implementation. The report is an interim assessment, with an endline study planned in 2021.

New evidence on gender and intrahousehold decision-making: Bernard et al show that in Senegal, children’s welfare (hemoglobin levels) is not only affected by who takes family decisions — men or women — but how well are their parents informed. In particular, they disaggregate results by household production and consumption decisions, and propose a typology of unitary and separate households differentiated by level of information possessed.

But that’s not all for gender! Am IFPRI working paper by Roy et al shows that women in Bangladesh receiving cash or food transfers, alongside nutrition behavior change communication (BCC), led to sustained reductions in intimate partner violence 4 years after the program ended. Looking at the same program with a different lens, Ahmed et al show that only cash plus nutrition BCC had a significant impact on nutritional status, including large effects on stunting levels (0.25 standard deviations).

Let’s discuss employment matters in the neighboring India: NREGA only reaches rural workers, so what would urban workers be willing to pay to participate in the program? A study by Dhingra reveals that urban workers would be willing to reduce their wages by 15% for greater job security (100 days of guaranteed employment).

Since I mentioned urban areas, here is collection of news on poverty in the city: in the UK, there is a 22% rise (726 people) in the number of homeless that died in 2018 relative to the previous year, the largest increase since 2013. (In the US, homelessness in the country affects over half a million people). Muketha blogs about women tackling malnutrition via urban farming, while a Timeline piece discusses legacy of the Panthers’ Free Breakfast Program (h/t Maitreyi Das)

What’s new in resilience and crises? A Brookings piece by Desai examines Somalia’s developmental challenges, not least having become Africa’s most violent state. CaLP et al hosted an interagency roundtable on humanitarian cash transfers providing a rich set of factoids and links to global resources. And Crawford and O’Callaghan have a wonderful paper reviewing the application of the Comprehensive Refugee Response Framework in Ethiopia, Kenya, Rwanda and Uganda.

Let’s take a look at financing issues: a WIDER paper by Kouwoaye shows that countries that shifted from taxes on international trade towards domestic taxes did better in poverty reduction (if the agriculture sector worked well!); instead such shift increased poverty in countries that moved from being net exporters to net importers of agricultural products. Bonus: an ICTD working paper by Mengistu et al estimates tax evasion in Ethiopia.

Data corner: Brazilian mayors change their beliefs and policy after evidence briefings, according to a VoxDev podcast with Moreira; Carraro and Chzhen compare multidimensional poverty metrics in Laos and Sierra Leone; Burgoyne reflects on upending the primacy of data and embracing complexity in social problems (h/t Duncan Green); and two resources on difference-in-difference, the quasi-experimental method as discussed by Jakiela and illustrated with some cool animations (h/t Jeff Mosenkis).

No time to read much? An alternative could be a podcast with Sam Hickey discussing 9 years of research at the center for Effective States and Inclusive Development.