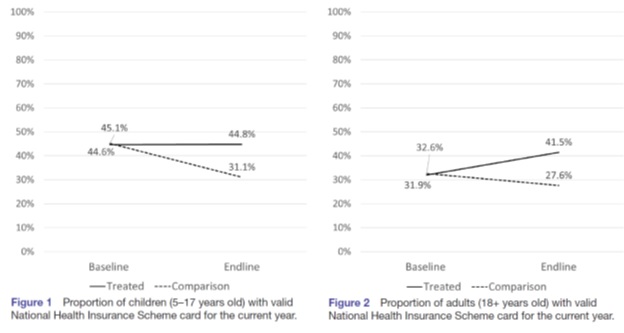 Combining social assistance and health works! In Ghana, LEAP provides bimonthly cash payments combined with a premium waiver for enrolment in the national health insurance scheme (NHIS). The program is targeted to extremely poor households with orphans and vulnerable children, elderly with no productive capacity, and people with severe disabilities. In 2015, “LEAP 1000” expanded eligibility to pregnant women and those with children under 1 year of age. What effects did this have? An evaluation by Palermo et al finds that enrolment in NHIS increased in the treatment group from an average of 37.4% to 46.6%, and decreased in the comparison group from 37.3% to 33.3% (due to fees and transport costs) – i.e., LEAP 1000 had a net effect of 14-15 percentage points in health insurance enrollment (h/t Amber Peterman).

Moving to Latin America, the universal child allowance scheme in Argentina provides 80% of cash transfers unconditionally, while 20% are tied to health and education coresponsibilities. What do we know about its effectiveness? Edo and Marchionni show that the program reduced girls dropout rates by 3.7 to 5.6 percentage points. But it had no impact on boys.

Speaking of gender, Ambler et al show that a one-off transfer in Senegal and Malawi affects household decision-making and women’s empowerment, but in opposite directions: in Senegal, where most households were large and polygamous, cash reduced the number of household members involved in decision making (in crop production) in the short-run, with effects dissipating two years after the transfer; in Malawi, cash positively impacted decision making in the short-term, with some evidence of persistence into year two (here complementary services also played a role). Bonus: check out this nice blog by Donald and Goldstein on disagreements over household decision-making.

More on gender! Field et al find that providing women bank basic account training, alongside signing them up for direct-deposit of government NREGA wages, led to them working more outside their homes, relaxed social norms, and increased empowerment among those with least labor market experience.

Since I earlier mentioned Malawi… a piece by Ansell as part of the ESRC-DFID Pensioners Poverty brief argues that most beneficiaries selected through community targeting in a cash scheme were older people, but such transfers were often ‘inherited’ by younger family members when seniors passed away, generating resentment within households and communities (see p.3).

From resentment to shame: by reviewing the thorny issue of stigma in social assistance across low and middle income countries, Roelen concludes that “…positive and negative effects co-exist but (…) far too little evidence is available to judge whether social assistance receipt overwhelmingly negates or plays into shame and stigma, particularly in low-income countries”…. and from stigma to sanctions: the German Constitutional Court ruled the most restrictive sanctions under Hartz IV are unconstitutional, only allowing benefit reductions up to 30% (under current rules, jobseekers monthly benefits can be cut by 60%) (h/t Johannes Koettl).

When do reforms cost an election? An IMF note by Ciminelli et al – one of the best political economy papers I read recently – finds that reforms are associated with significant electoral costs only when implemented in the runup to elections. In contrast, reforms undertaken earlier in an incumbent’s term do not affect election prospects. Also, reforms have political costs when enacted in periods of weak economic activity, and have benign electoral consequences in good times. Moreover, reforms that engender large short-term adverse distributional effects— e.g., some types of financial deregulation — can prove electorally costly (h/t Verena Fritz).

From political cost to costing diets: Hirvonen et al estimate that most affordable EAT–Lancet diets (a global benchmark diet capable of sustaining health and protecting the planet) cost a global median of $2·84 per day. While representing a tiny fraction of average incomes in high-income countries, the diet is not affordable for at least 1.58 billion people worldwide.

And since we are discussing shocks… what is the share of international humanitarian assistance within the overall resource flow to countries affected by humanitarian crises? Well… as little as 1% (!) according to a new ODI paper by Willitts-King et al, with remittances, faith-based flows and local community resources playing a major role (see figure 4, p.9).

Let’s explore the labor and skills corner (in partnership with Indhira Santos and Michael Weber): using data from Uber’s corporate job postings, Abraham and Stein find that removing optional qualifications and softening language about the intensity of qualifications increased the total number of applications by 7%. A global review of minimum wages by Dube (and commissioned by the UK treasury) finds “… muted effect of minimum wages on employment, while significantly increasing the earnings of low paid workers” (see also Annex A on evidence from 7 US states and Annex B on the estimated impact of UK’s national living wage). Bonus on the US: Brodeur and Yousaf suggest that job-market interventions aimed at high-risk individuals could help prevent mass shootings (40-45% of shooters were in financial distress, unemployed/out of the labor force).

Some big-picture materials on taxation, debt and upward mobility! McKay et al estimate the tax responsiveness of the extensive margin of formality, that is the propensity to be a formal rather than informal worker, for Ghana, Rwanda, Tanzania, and Uganda. Results? They do not find robust effects of taxes on the extent of formal work; Funjika and Getachew argue that colonial origin may be important factor in shaping intergenerational mobility in the region; and Griffiths proposes 4 solutions to solve the low-income country debt crisis.

Bulletin board: David Bloom has a new book, Live Long and Prosper? The Economics of Ageing Populations (in particular see chapters on employment and the health burden on informal caregivers, and on design of means-tested pensions); the Kela conference on social security 2019 is coming up in Helsinki on December 10; and the Second Global Summit on Food Fortification will be held in Bangkok, March 21-23, 2020.