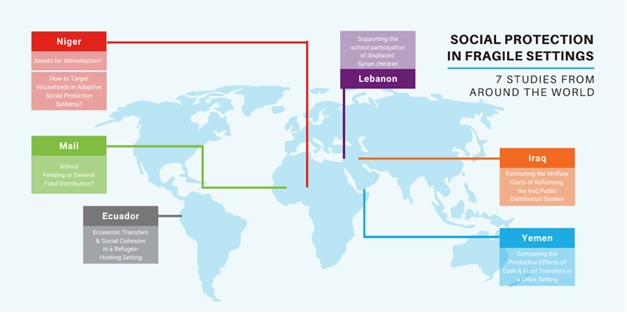 There is growing experience on social protection in fragile contexts, but how do we know ‘what works’? Can experimental and other robust methods be used in such environments? Bruck et al have a JDS special issue featuring seven high-quality evaluations that raise substantially our understanding of the role of social protection in fragile and displacement settings. The studies shed new light on a range of themes, including program design, targeting choices, and effects on host communities (see also blog here). In particular…

From one compilation to another! Balboni and Peres dedicate the new IPC In Focus issue on universal social protection – see Stern Plaza et al for a framework, Bezhanyan and Rodriguez as well as McCord for a discussion on SDGs, Alfers on informality, and D’Andrea et al on rural fishery communities – plus case studies on Ethiopia (Kessa), Kenya (Mbaka), Indonesia (Maliki et al) and Brazil (Guerreiro Osorio et al).

Since I mentioned Indonesia, Bah et al show that, by supporting 25 million households, the national registry (UDB) is one of the largest globally. They find that UDB is more progressive than previous, program-specific targeting approaches. However, if all households were included in the database, undercoverage would be reduced by one-third compared to focusing on households registered in the UDB. Overall, they find large gains in targeting performance from improving the initial registration stage relative to the ranking stage. Bonus on CCTs: Ladhani and Sitter offers a critical review of conditional cash transfers (the paper offers a number of interesting points, although it is largely qualitative with limited support of descriptive statistics).

More on the region: a UN interagency report on food security and nutrition in the Asia-Pacific region estimates that 77.2 million children are stunted and 32.5 million suffered from wasting (h/t Andrea Rossi). Interestingly, a section of the report (p.35-51) nicely combines the discussion on nutrition-sensitive social protection with the shock-responsiveness agenda (e.g., see nutrition framework p.38 and program principles, p.40).

From natural to health shocks: the cost for tuberculosis (TB) can be “catastrophic” for poor people. Can cash transfers help offsetting those expenditures? Rudgard et al present calculations for 7 countries (Brazil, Colombia, Ecuador, Ghana, Mexico, Tanzania, and Yemen) showing that, with cash payments ranging between $217 and $1,091/year/household, TB costs exceed transfers: in fact, making transfers “TB-sensitive” would require an additional budget between $165M and $298M per country.

From shocks to governance: can cash transfers alter citizens’ perception of government? In Fiji, Rios et al show that people receiving post-Cyclone Winston cash transfers are up to 20% more likely to be very satisfied with the government than non-recipients.

But wait a second… all of the above shows there is so much being pursued by cash transfers. This underscores a key issue: the importance of asking the right question. Alderman et al raise this issue in the context of Mexico, but it has broader applicability – “… assessing a transfer program in terms of a single outcome – in effect asking ‘is the transfer the most cost-effective way to allocate education (health) budget?’ – will provide a misleading answer compared to using the human capital improvements as one dimension of the answer to the question, ‘is the program the best wat to allocate the finds devoted to transfers given multiple objectives?’ ”

So let’s get into human capital issues more fully! Behrman finds positive impacts of parental human capital and endowments on social mobility in low- and middle-income countries, and discusses gaps in the literature pertaining to both data and methodology. Torche reviews the literature on intergenerational educational mobility and shows that low and middle income countries display stronger intergenerational educational persistence than high-income countries.

From mobility to jobs, with the labor and skills corner (in partnership with Indhira Santos and Michael Weber). How did the prosaic Danish ‘flexicurity’ fare in the wake of the Great Recession? A paper by Andersen estimates that most unemployment spells were short, muting the effects on long-term and youth unemployment.

What interventions can increase labor market outcomes? Dang et show that in Vietnam childcare attendance had significant and medium-term effects on women, including their total annual wages, household income, and poverty status. Crépon and Premand analyze the impact of subsidized dual apprenticeships combining on-the-job and theoretical training in Côte d’Ivoire: the intervention creates 0.74 to 0.77 new position per subsidized apprentice, offsets forgone labor earnings and, four years after the start of the experiment, treated youths’ earnings increase by 15% percent. In terms of intermediation, Topa reviews lessons from social connections and referrals in the labor market, both on the job-seeker and employer side.

And on skills? Morsy and Mukasa show that skill and educational mismatches are prevalent in Africa: 17.5% of employed youth are overskilled, 28.9% underskilled, 8.3% overeducated and 56.9% undereducated. In 2012, a labor market reform in Italy known as the Fornero Law substantially reduced firing restrictions for open-ended contracts in the case of firms with more than 15 employees: Bratti et al show that the reform induced less worker trainings due to reduction in worker turnover and a lower use of temporary contracts. Costa and Fleith examine predictions of academic achievement by means of cognitive and socio-emotional variables: interestingly, they find that some socio-emotional variables had greater predictive power than intelligence (e.g., self-regulation, satisfaction with the learning process, self-efficacy and learning engagement).

From data scarcity to data abundance: how did the United States in progress against poverty since the 1960s ‘War on Poverty’? A paper by Burkhauser et al shows that, well, it depends what measure is used – progress ranges from very little (-10 percentage points in 50 years) to almost eliminating it.

Last but not least: the Chilean Senate has unanimously passed a bill to gradually increase the lowest pensions in the country by up to 50% amid anti-government protests. Better listen than reading? WIEGO is producing a nice set of monthly podcast – the Informal Economy Podcast: Social Protection (h/t Cyrus Afshar).