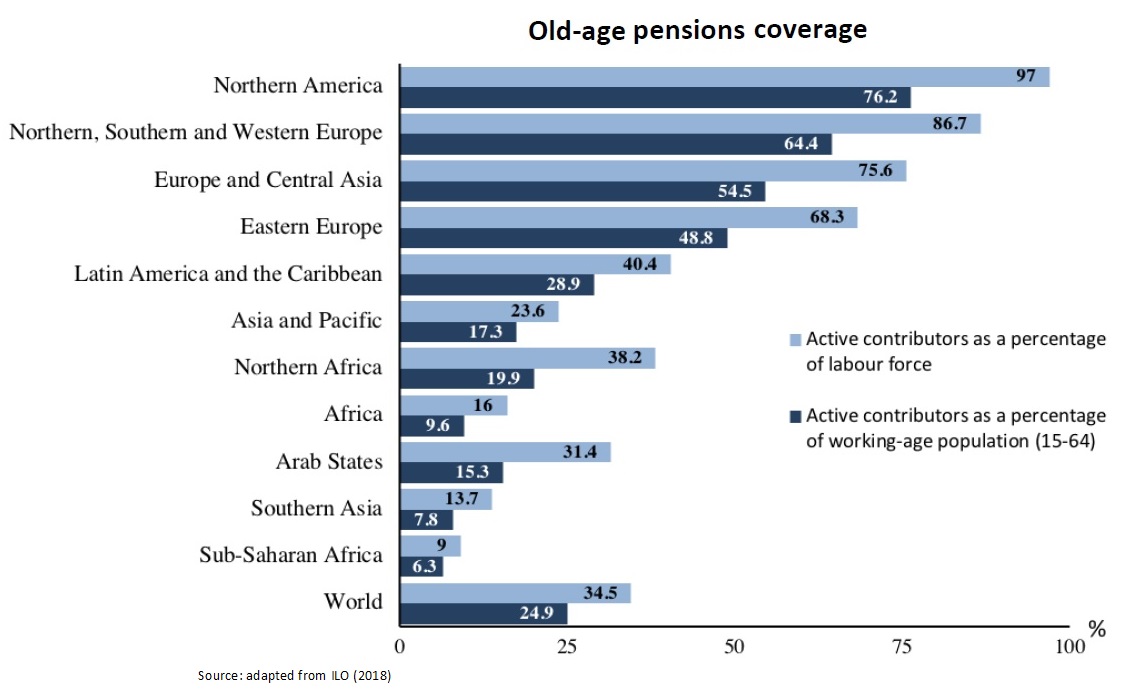 What’s the global state of social and contributory pensions? A new ILO report shows that 68% of people above retirement age receive a pension worldwide, while in most low-income countries about 20% do so. Coverage increased from 2000, when only 34 countries reached effective coverage of more than 90% of the population above statutory pensionable age; in 2015-17, 53 countries did so. A big push was provided by the proliferation of social pensions – see box 2 and 3 (p.9-11) for expansions of non-contributory models (e.g., Bolivia, Namibia and Timor Leste) and mixed contributory and non-contributory schemes (e.g., Brazil, China, and South Africa). Yet the adequacy of social pensions is limited: out of 37 countries, only 5 countries had transfers above the national poverty line, and in 20 countries transfers are even less than half that line (e.g., India, Turkey and Russia): “… [o]lder persons receiving a social pension in these countries are still poor” (p.21). In terms of purely contributory schemes, one-quarter of the working-age population contributes to a pension scheme globally, ranging from 6.3% in sub-Saharan Africa to 76.2% in Northern America (see figure above).

Moving to other forms of social protection, how do we know if beneficiaries of conditional cash transfers exit the program for true ‘livelihood graduation’ or mere ‘administrative deselection’? A JEL article by Villa and Nino-Zarazua asks a compelling question of how should program administrators treat beneficiaries that exit poverty in period t-1, but exhibit a high probability of falling into poverty in period t-2. Examining the flagship Prospera CCT in Mexico, they find that only one-third of program beneficiaries that were poor in 2002 exhibited low probabilities of becoming poor in 2009–12 (i.e., they are ‘true graduates’ of the program). They also find that the recertification process of the program—which takes place every three years—would be more efficient if it took place every 3.7 and 5.1 years in urban and rural areas, respectively.

But are monthly payments spent differently than lump sum transfers? Yes, according to a WD piece by Morton on Brazil’s Bolsa. Based on evidence from Northeastern Brazil, he shows that different payment schedules can lead to different patterns of investment in assets. The comparison drew from the monthly CCT assistance versus a maternity wage program, that gives a sizeable lump sum to women when they become pregnant. In particular, women typically spend monthly cash assistance on items like clothing and furniture; by contrast, lump sums are used by women to purchase income-generating assets, like cows and fields, that would normally be held by men. But it is not just about the frequency: the paper argues that two key features underlie this pattern with grants, namely a payment’s large size and its unpredictability. These affect the mental accounting that beneficiaries use to understand money and the institutions through which they save it.

From payment frequency to another design choice – what is the comparative impact of gratuitous cash grants versus grants provided as credit? New evidence from Ethiopia by Tadesse and Zewdie examines the question in the context of the national PSNP program: some 8,400 of it beneficiaries participated in a cash grant pilot (providing $200/person), which was compared to other recipients of the credit-based HAB. Results show that grant-based livelihood investments are about 0.09 and 0.14 percentage points higher than loan-based livelihood investments in internal rate of return and capital growth rate, respectively. This is because. Why such difference? The authors argue that, unlike loans, the failures and success of investments using grants are fully born by the households, hence they may put greater effort into it. Also, the absence of credit risk may matter – a risk that forces the investor to pay from other personal assets if the project fails. The only risk to the grant projects is loss of the value of the investment. Therefore, grant users my take risk to invest on high-payoff but risky livelihoods.

More on Ethiopia: Rashid et al review the tremendous progress in managing large covariate shocks. The latest success was dealing with El Nino related drought in 2015 that resulted in sharp increase in vulnerability. An estimated 10.2 million people, in addition to 8 million people supported by the PSNP, were in need of food aid, with 400,000 children severely malnourished. The magnitude of 2015 food security shock was much larger than 1983 drought related famine, which claimed 300 thousand lives. By contrast, there was no reported death in 2015 and, unlike past, the disaster was largely managed by the national institutions and resources.

Let’s move to Asia, where a WBER article by Bah et al examines the Unified Database for Social Protection Programs in Indonesia. In assessing possible targeting errors, they attribute them to two factors: misenumeration, or undercoverage of poor households during the enumeration process, and misclassification of households during the ranking stage. Their results highlight the value of increasing the number of households enumerated in the national targeting registry survey (“a full census would cost 11% of the value of additional benefits received by households omitted from the registry”). A related option would be to identify the poorest areas based on poverty maps at higher levels of geographic aggregation (where they tend to be more reliable), and then to survey all households in these areas (saturation strategy). Targeting gains from this approach would also be relatively larger than those from improving the PMT estimates by adding more difficult-to-observe assets. A complementary strategy deserving attention, the article argues, would be to transform the household targeting system registration into a more open process to allow greater entry.

From East to South Asia: “India’s biometric ID, Aadhaar, is here to stay”, states a new commentary by Gelb et al. Indeed, India’s Supreme Court verdict (about 1,500 pages long) was a milestone ruling with deep implications for IDs in the country. So, who can ask people for their Aadhaar? Social protection institutions and tax authorities can do so, but not schools, private banks, and mobile phone operators (h/t Tina George). Bonus on the region: in a JDE article, Hill et al find that in Bangladesh, agricultural index insurance encouraged, consistent with theory, farmers to take on greater risk, particularly through expanding area under higher-value crops and through investments in risk-increasing agricultural inputs during the monsoon season

Jumping to the US, most of the benefits of the Earned Income Tax Credit (EITC) generally accrue to low-income workers with children. The maximum credit available to workers without dependent children is just over $500/year, and they lose eligibility entirely once their annual earnings reach $15,000. A pilot program, “Paycheck Plus”, provided more generous credit for people with such profile. Specifically, the program provided up to $2,000 at tax time for 3 years, and was tested in NYC and Atlanta among 3,000 low-income single adults without dependent children. The RCT by Miller et al found that the trial increased earnings, reduced severe poverty, modestly increased employment rates (especially among women and the more disadvantaged men in the study), increased tax filing rates, and also led to an increase in child support payments among noncustodial parents.

It has been a big week for human capital, with the foundational paper on the HK Index by Kraay, the Learning-Adjusted Years of Schooling piece by Fimer et al, Collin and Weil’s simulations of HK on growth and poverty, and the paper by Gunewardena et al examining gender schooling and skills differentials. The Lancet piece by Lim et al, which in not related to the Bank’s HKI, is available here.

New resources on inequality: a forthcoming piece by van der Weide and Milanovic shows that in the US, high levels of inequality reduce the income growth of the poor but, if anything, help the growth of the rich. A thought-provoking EER article by Ravallion argues that prominent stylized facts about global inequality are not robust (see his blog here). He shows that parameter values consistent with research on global subjective wellbeing imply higher inequality than prevailing measures, though decreasing since 1990: “… there is almost certainly more inequality in the world than we think, but it is likely to be falling”. Not sure if it is good or bad news, but Kharas and Hamel’s Brookings blog illustrates that the world is split in half – 3.8 billion people are poor (<$1.9/day) and vulnerable ($2-10/day), while an equal number is middle class ($11-110/day) or rich (>$110/day).

Some broader development narratives: an article discusses Stiglitz’s grim views for manufacturing in Africa: “… global employment in manufacturing is going down because productivity is going up faster than demand. (…) It doesn’t mean that manufacturing [in Africa] can’t be an important part of the strategy, as it was part of Asia’s growth – but you have to ask the question: if that doesn’t work, what can work? (…) It follows that you need to have a multi-pronged strategy”. A new working paper by Nayyar et al takes a slightly different view and argue that premature deindustrialization matters less than before because the features of manufacturing that were considered uniquely special for development are increasingly shared by the services sector in developing countries. Finally, using a comparative framework assessing the variation of developmental trajectories in Asia, a paper by Evans and Heller explores the changing role of the state in promoting economic and social transformation.

Final treat: the Transfer Project has a new handy set of cash transfer infographics, briefs and summaries on nutrition, gender, and more.