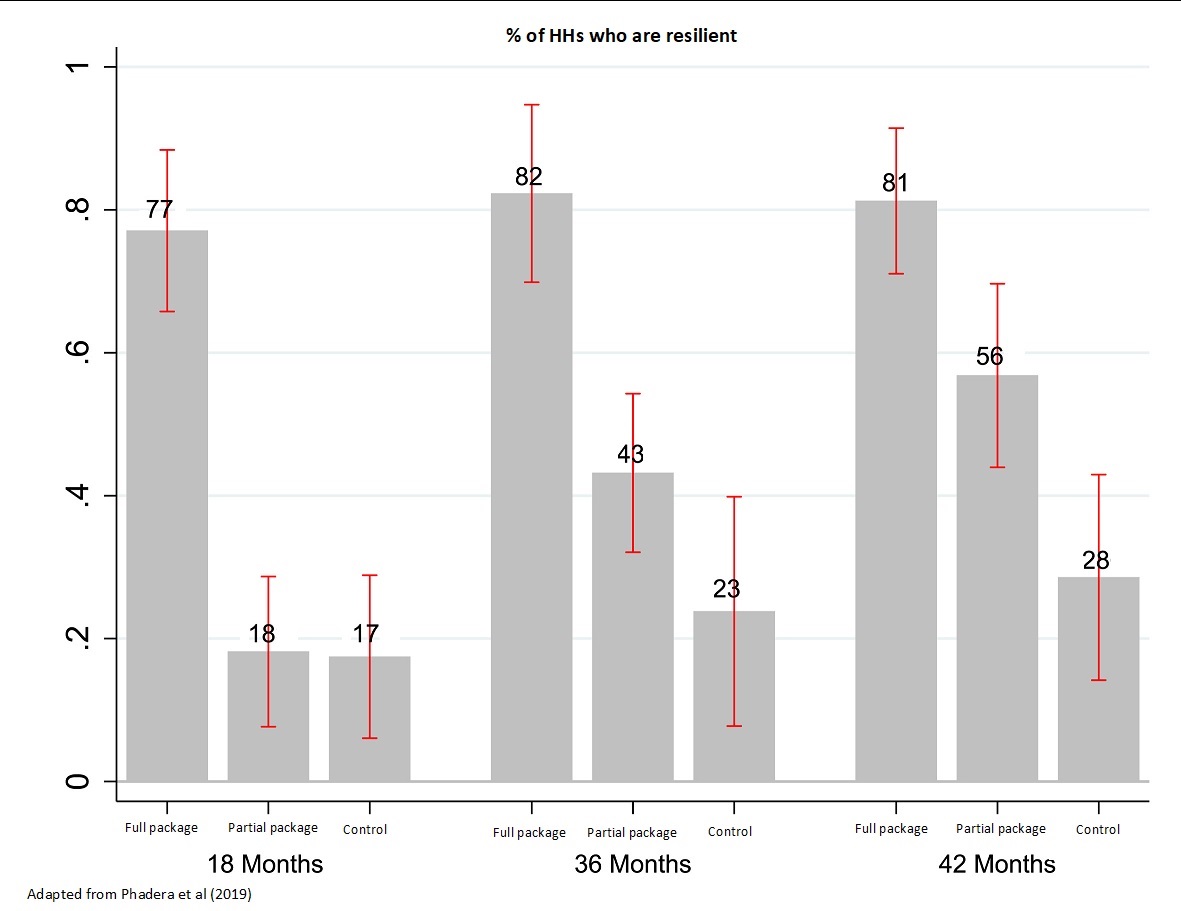 Can asset transfer “graduation” programs increase household resilience? Phadera et al present new evidence from an integrated asset transfer program in Zambia. The intervention makes a one-off livestock transfer, provides training on livestock management and other livelihood skills, and offers veterinary and agricultural extension services. The value of the asset package was around $1629, while resilience was measured as “the probability that a household would sustain at least the asset threshold level (estimated to be $308) required to support consumption above the poverty line”. The study included three groups: initial beneficiaries receiving a full package were required to pass on a female offspring for each female animal they received through the program to the members of their groups that did not receive a transfer in the initial round. These second-phase recipients received a partial package (training at the baseline and a lower value asset transfer after a delay). A control group received nothing. The paper finds that full-package beneficiaries were 44% more likely to be non-poor than control households 42 months after the intervention. About 81% of initial beneficiary households were resilient at endline, 57% of partial beneficiaries were so, while less than 30% of controls were resilient.

A JDE article by Bosch and Shady estimates the labor market effects of the Bono de Desarrollo Humano (BDH) program in Ecuador. The program operates at a large scale – it covers about one-fourth of the population and with relatively generous transfers (about 20% of the pre-transfer income of the poorest 40%). Despite these magnitudes, the paper shows that the BDH did not reduce adult work. In particular, the study rules out any negative effects on work of 0.5 percentage points or larger. However, it shows that the program led to some reallocation of beneficiaries’ labor (principally women’s) from the formal to the informal sector. Most of the increase in informal employment occurred within industries and occupations. Although effects are statistically significant, they are small (reductions in formal employment were of 1.2 percentage points, from a counterfactual level of 16.3 percent).

More on cash transfers in LAC. Masino and Nino-Zarazua assess the effects of the initial phase of transitioning of Oportunidades/Prospera’s cash payments onto an electronic system in Mexico. This is relevant as the transition from cash payments to savings accounts represented, for most beneficiaries, the first direct encounter with a formal financial institution. The paper finds that access to savings accounts led to a reduction in the rate of participation in “tandas” in urban areas. The incentives that the electronic payments generated for the utilization of savings accounts, combined with the transaction costs tandas entail in terms of peer-monitoring, organization effort, and risks of theft, are explaining the substitution effect between formal and informal savings. In addition, by forcing regular visits to programme branches, Prospera electronic payments increased households’ exposure to other formal financial services to accumulating assets and improving their risk management portfolios. Specifically, the intervention improved information on remittance services, reduced associated transaction costs and service fees, possibly improved security and consequently increased the frequency of remittances reception. This, in turn, contributed to smoothing consumption and mitigating the catastrophic effects of income shocks.

Some less positive effects of CCTs: can Colombia’s Familias en Accion program increase parents’ education aspirations for their kids? Not really, according to a forthcoming EDCC article by Suarez and Cameron. Somewhat unexpectedly, they show that the scheme’s participation is associated with parents attaching a lower probability to their children finishing tertiary education, particularly in urban areas. These results suggest that participant households’ motivation for sending their children to school is a direct result of the monetary transfer they received and the accompanying conditions rather than to any change in aspirations.

What happens when combining public works and health insurance? Shigute et al examine the case of Ethiopia where participants benefited from both PSNP and the Community Based Health Insurance (CBHI) schemes. Despite the fact that the two programs are not formally linked, the paper found that individuals who participate in both programs, as opposed to neither, were 5 percentage points (pp) more likely to use outpatient care and 21pp more likely to participate in off-farm work. Participation in both schemes was also associated with a 4pp increase in livestock and a 28pp debt decline (note of caution: that these are not causal effects).

From Ethiopia’s to India’s flagship NREGA public works program. Deininger and Liu find that a one-year participation in NREGA increased consumption (9.8%), energy (10.3%), and protein intake (8.7%). Where the program had been available for two years, participants increased access to non-financial assets, directly or indirectly (e.g. by encouraging them to adopt a riskier portfolio of activities). Such direct impacts almost exclusively concentrated among the poorest segments of the population (including scheduled castes and tribes).

More on Africa: check out the materials from an interesting event that took place this week in Nigeria – the social protection cross-learning summit (h/t Alex Yuster and Gbenga Shadare). The event included a number of papers and ppts on Nigeria-specific issues, including on system-wide matters, select interventions, sectoral connections, social registries, coordination, humanitarian linkages, nutrition-sensitivity, and much more.

Since I mentioned humanitarian aid… its global system relies on a multitude of funding models, sources and innovations, all of which are reviewed and assessed in an excellent ODI report by Willitts-King et al. See for example the “splitted sun” figure on p.13. And on a specific kind of humanitarian crisis, WHO has a compilation of “10 things to know” about refugees.

Let’s look at a couple of resources on universality: Subramanian’s last year prediction eventually came true – India’s Sikkim state seems poised to pilot a real UBI scheme, and it is does so on a big scale (for all its 610k+ citizens). The BBC has a 30 min video/podcast on the history, present and future of the universal credit in the UK.

Mixed assortment: school feeding programs can take many forms, one of which includes the purchase of foods directly in schools. In this regard, the South Korean government has banned sales of unhealthy foods in school stores since 2009; however, most of them still sell restricted foods. Why? An article by Choi et al argues that poor monitoring of school stores, lack of awareness of the policy, and profit-seeking were among the reasons for incomplete policy implementation. As countries grow, how does the transition from a World Bank IDA to IBRD status affect lending on human development sectors? Well, borrowing for those purposes goes down, according to Gatti and Mohpal’s working paper. And speaking of growth, a Brookings piece by Gill describes a state of “joyless growth” in China, India and US.

Let’s end on a nerdy note – Deaton’s classic ‘Analysis of Household Surveys’ volume is being reissued with a new preface!