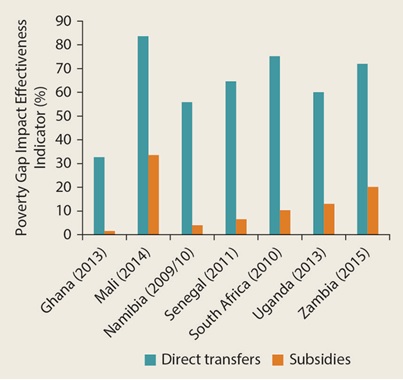 It’s Africa week! Beegle and Christiaensen have an awesome edited volume on poverty in the region just off the press. The report takes us on a tour around major issues in demography, jobs, and risks, including a thoughtful discussion on, for example, unpacking the food system and prospects for wage employment. While discussing financing, they show that transfer programs “…. achieve 50% or more of [their] maximum poverty gap reduction potential, [while input] subsidies often achieve less than 10% of [such] potential” (p.269). But that’s not all: Calderon et al take Africa’s Pulse via the biannual flagship (see discussion on safety nets p.53-57).

Moving to country-level materials, I was pleased to see more work on cash transfers coming out of Nigeria: Akinleye et al reflect on 10 years of conditional cash transfers (CCTs) in the country, based on which they recommend to increase the eligibility period, expand coverage, integrate CCTs with other programs, and improve governance mechanisms. In Kenya, a social protection review is being released by the government: 1.02 million households were in receipt of social assistance transfer in 2016, with the report discussing coverage, delivery, impacts and financing issues.

Gender! Annan et al examine women’s power relative to that of their husbands in 23 African countries to determine how it affects women’s health, reproductive outcomes, children’s health, and children’s education. Of course there is also a cash transfers angle to the theme: Klein and Barham’s show that Mexico’s Progresa more than doubled women’s household bargaining power. BTW, listen to this interesting 33-min podcast with Santiago Levy on Mexico’s cash transfers, their introduction and political economy (no, he doesn’t comment on Prospera’s demise…).

Since I mentioned children… what does ‘stunting’ really mean? Beegle and Galasso draw from an extensive set of impact evaluations and offer some insightful reflections on the interaction between health and cognition in the early years. Bonus: Field and Maffioli examine the positive effects on stunting from combining cash transfers and nutritional behavioral change in Myanmar.

News on mobility? A new World Bank report examines migration and brain drain in 23 European and Central Asian countries. The report is fully of juicy facts (e.g., migrants’ share of the world population is stable at 2.5–3.5%, while 1/3 of migrants goes to Europe), but the most fascinating discussion is around policy. For workers negatively affected by migration competition, governments could help retraining and adjusting the education systems; providing relocation assistance for workers who need to change occupations, cities, or sectors of employment; allocating transitory welfare benefits and unemployment insurance payments; and considering additional income tax, a visa fee, or even a visa auction system.

Speaking of employment, let’s look at research at the intersection of safety nets and labor markets: Shrinivas et al’s show that food transfers in India led to reductions in labor supply, which rose wages benefiting the poor. And a new paper by Kleven questions the efficacy of work requirements in safety nets programs, including the US EITC – the program “…. has not had any clear effects on labor supply at the extensive margin” (h/t Martin Ravallion).

Let’s move more fully into the ‘labor and skills corner’ (produced in partnership with Indhira Santos and Michael Weber). A paper by Brock and De Haas tests gender discrimination in small business lending in Turkey and finds that loan officers are 30% more likely to make loan approval conditional on the presence of a guarantor for women applications. Can microfinance unlock a poverty trap for some entrepreneurs? In Hyderabad, Banerjee et al find that treated households own, 6 years later, businesses that have 35% more assets and generate double the revenues as those in control neighborhoods. Still in India, Nageswaran and Natarajan argue that policies aimed at creating jobs should support, first and foremost, the establishment and growth of new and young formal firms. In Indonesia, Cali et al show that higher housing prices are associated with higher mobility costs. In Italy, Cappellini et al estimate that traineeships hinder rapid transition to work, but they are effective stepping-stones for young people seeking a quality career (i.e., they enhance the likelihood of finding a quality job by 7 percentage points). Finally, Goldstein discusses daycare and employment upgrading Kenya.

What’s new on resilience and crises? Konyndyk and Warden have an interesting piece on power and participation in humanitarian action. It charters faltering past and present efforts at strengthening accountability and the importance of moving beyond technical fixes with recommendations on how to really challenge the power structures of the aid system (h/t Chris Porter).

On a different kind of crisis, recent riots in Ecuador are shedding new light on how hard it is to reform energy subsidies in practice – or at least when reforms are not directly synchronized with enhanced social protection. Bonus on energy: the Natural Resource Governance Institute published a database providing open data on national oil companies (NOCs) production, revenues, spending, assets, liabilities and transfers to governments, with more than 70,000 data points from 71 NOCs over 2011-2017. An accompanying report by Heller and Mihalyi describes the influence NOCs exert on public finance and other realms (see also short IMF blog).

Oh, speaking of Ecuador, what drove overall (mild) poverty reduction in Latin America? Caruso et al show that economic growth accounted for 70-90% of the reduction, while inequality for 12% of it. Why inequality featured so little? It didn’t occur much over time, so huge potential to do more. Bonus: Ortiz and Cummins have a thought-provoking piece on the insanity of austerity.

Final fireworks: Evans and Music have a great roundup of research (150+ papers) on development economics, including at least 5 papers on social protection (3 of which were included in this edition); Barrantes puts dignity and empathy as the center of social protection; Rodrik reviews Acemoglu and Robinson’s new book, The Narrow Corridor; and Hennessy et al investigate the neurological positive effects of music on children from underserved communities (h/t Michael Weber).