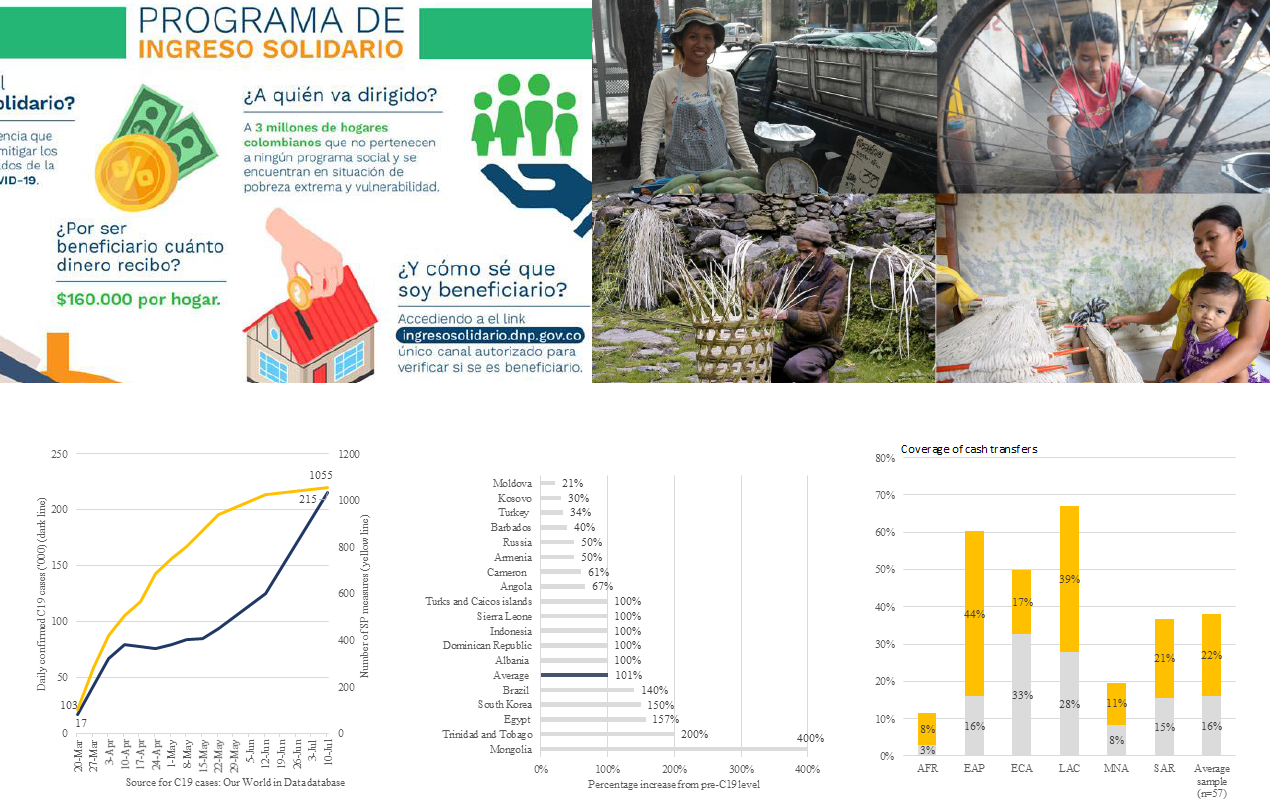 Check out v12 of the global social protection C19 paper… and feel free to use our Excel database!

So what’s happening aorund the world?

Social assistance accounts for most of the social protection response. A total of 638 measures were recorded, accounting for 60% of the response. Nearly 50% of those safety net measures, and about 30% of global measures, are various forms of cash-based transfers. Besides 298 cash transfer programs in 139 countries (6 of which universal transfers), a robust number (25) of social pension schemes is implemented in 22 countries. In-kind transfers are also substantial, with 22% of the social assistance portfolio including the distribution of food commodities, vouchers and school feeding programs. Both in-kind transfers and cash have bene growing steadily over time. Finally, 15 public work programs, a modality largely discontinued or amended in the early phases of the pandemic, are now present in 12 countries.

Cash transfer programs tend to be of short duration and relatively generous in size. Information on duration is available for 71 cash transfer measures ranging from 1 to 12 months, for an average of 3.1 months. In terms of generosity, data from 20 countries shows that average transfers doubled (+101%). The size of cash transfers more than doubled in five countries (Mongolia, Trinidad and Tobago, Egypt, South Korea and Brazil). Overall, transfers represent 29% of average monthly GDP per capita.

Overall, social assistance continues to be adapted to the crisis. A total of 62 programs in 47 countries have simplified and made their administrative systems more user-friendly. This includes making it easier for people to access programs, provide advance payments, waiving conditionalities, allow for remote applications, etc. More generous transfers are provided for 78 programs in 58 countries, both in terms of higher transfer levels and extra payment cycles. Scale-up of program coverage is occurring in 165 countries and concerns 479 measures. Among them, existing programs are being scaled-up in 26 cases. A total of 454 programs are new (71% of social assistance), 79 of which are one-off measures (12% of the total).

Over a billion individuals benefitted from social assistance in various ways. Based on our analysis, 4 sets of numbers can be considered: if we consider the full set of ways in which programs are adapted (i.e., administration, adequacy and coverage), these have benefitted 1.8 billion people (1,801,343,016). If we examine the sole metric of horizontal coverage expansion for cash transfers, then such scale-up covered almost 1.1 billion people (1,080,686,828). This is 14% of the world’s population. This level would increase by about half a billion people, or totaling 1.6 billion, if also in-kind transfers are included (1,611,029,017).

Informal sector workers are one of the main populations targeted with cash transfers. We estimate that 136.7 million such workers are reached by cash-based programs. This is likely a conservative estimate, with countries announcing the intention to reach informal workers but not systematically reporting coverage numbers. Countries with higher rates of coverage include Philippines and El Salvador, while in absolute terms Argentina and Colombia show overage of 9 and 10 million, respectively. Morocco’s reach of 3 million informal workers – the program that taps the health sector database (Ramed) documented more in detail in May’s editions featuring delivery practices – is also remarkable.

The level of cash transfers coverage in response to Covid doesn’t appear correlated to countries Covid policy measures. One way of examining this is by plotting cash transfers coverage against the Stringency Index: In Latina America, for example, some countries like Peru and Bolivia has adopted strict policies accompanied by large-scale cash-based provisions; other countries such as Honduras, however, have similarly strict measures but without the provision of cash at a comparable level.

How much were cash transfers scaled-up relative to pre-Covid levels? To explore this question, we use administrative data from the ASPIRE database for 57 countries. For 14 of them, coverage started from very low levels, with resulting scale up for a factor of 10 and beyond. If we exclude those exceptional cases, for the remaining sample of 43 cases the average rate of increase in cash transfers coverage is about 244%. Note that baseline data should be taken as an upper bound estimate since administrative data tends to overestimate rates due to possible program overlaps.

How much is the coverage of cash transfers as % of the population if we also consider pre-existing schemes? We provide estimates for rates that consider both Covid ‘horizontal’ scale up as well as pre-Covid coverage. This is important to consider because many countries have maintained coverage of beneficiaries in pre-Covid programs (which wouldn’t appear as “scale up”), while seeking to expand coverage to new beneficiaries – whether through extending pre-existing schemes or introducing new ones. Our preliminary estimates indicate that planned or actual cash transfers reach 22% of the sample of 57 countries with ASPIRE administrative data pre-Covid. These are “on top” of pre-existing cash transfers which reach 16% of the population. Combined, the pre and Covid coverage equals to an average of 38% of the population in those countries. These range from between 60-70% in East Asia, Latina America and high-income countries to less than 20% in Africa, MENA and low-income settings.

Importantly, how many of country measures are planned, ongoing or ended in practice? This is an important question to get a firmer grip at country level action. While reporting is often limited, patchy and unavailable, we re-surveyed the universe of social assistance measures with a view of understanding their ‘state in implementation’. Information was available for about 31% of the sample, or 195 measures. Out of these, 72% (141 measures) are ongoing, while the rest of the portfolio is either planned (13%) or completed (14%) at this time. For instance, the reassessment revealed that some countries had announced measures which would be subsequently canceled: for example, Egypt had planned a cash transfers for 200,000 informal sector workers, but this was eventually reconsidered.

Turning to other key social protection components, social insurance programs slightly increased since June. This includes an additional 10 measure and 3 additional countries, bringing the count to 273 and 125, respectively. Most programs include unemployment benefits (79 measures), followed by paid sick leave (68) and the wavers, deferment or subsidization of social security contributions (61). Also significant is the number of pensions and disability-related measures (50), while healthcare insurance support only appeared in 15 cases.

Supply-side, worker-related labor market programs also grew, although less extensively. With 144 programs in 88 countries, this edition cements the role of wage subsidies as the lead labor instrument: those measure now account for 56% of the labor portfolio with 81 measures in 69 countries. Other measures include labor market regulation adjustments (28 cases), 23 activation initiatives, and shorter-time arrangements (12).

Regions present different combinations of social protection components. Relative to last month, the broad composition remains similar, with marginal changes in the order of one percentage point. Sub-Saharan Africa is the region with the highest share of social assistance (84%), followed by South Asia (76%) and Latin America and the Caribbean (71%). North America as well as Europe and Central Asia display a higher reliance on social insurance, while East Asia present the largest share of labor market measures (e.g., with programs in Singapore, China, Indonesia, Malaysia, and Philippines). The latter as just 5% in Sub-Saharan Africa and South Asia.

Some good news on measures in conflict and fragile situations. Among these countries, 13 new measures were included since June, and a few countries, notably Syria, are now actively introducing social protection measures. Burundi, Central African Republic, Eritrea, Kiribati, Marshall Island and Yemen are the only countries for which measures were not recorded.

How much are countries spending on social protection responses? For a subset of countries for which data is available (75 in the case of social assistance, 21 for insurance, and 17 for labor markets), a total of $589 billion is being reported. This is line with the level reported in June and represents about 0.4% of the world’s $142 trillion GDP. Such level of investment is comparable to the overall social protection spending that occurred as part of the global response to the 2010 financial crisis (note that the Covid crisis may well be at the early stages, with potential for spending to soar remarkably). Per capita spending, however, is highly uneven: this ranges from $121 in high-income countries to a mere $1 in low-income settings; similarly, South Asia only provides $3/capita.