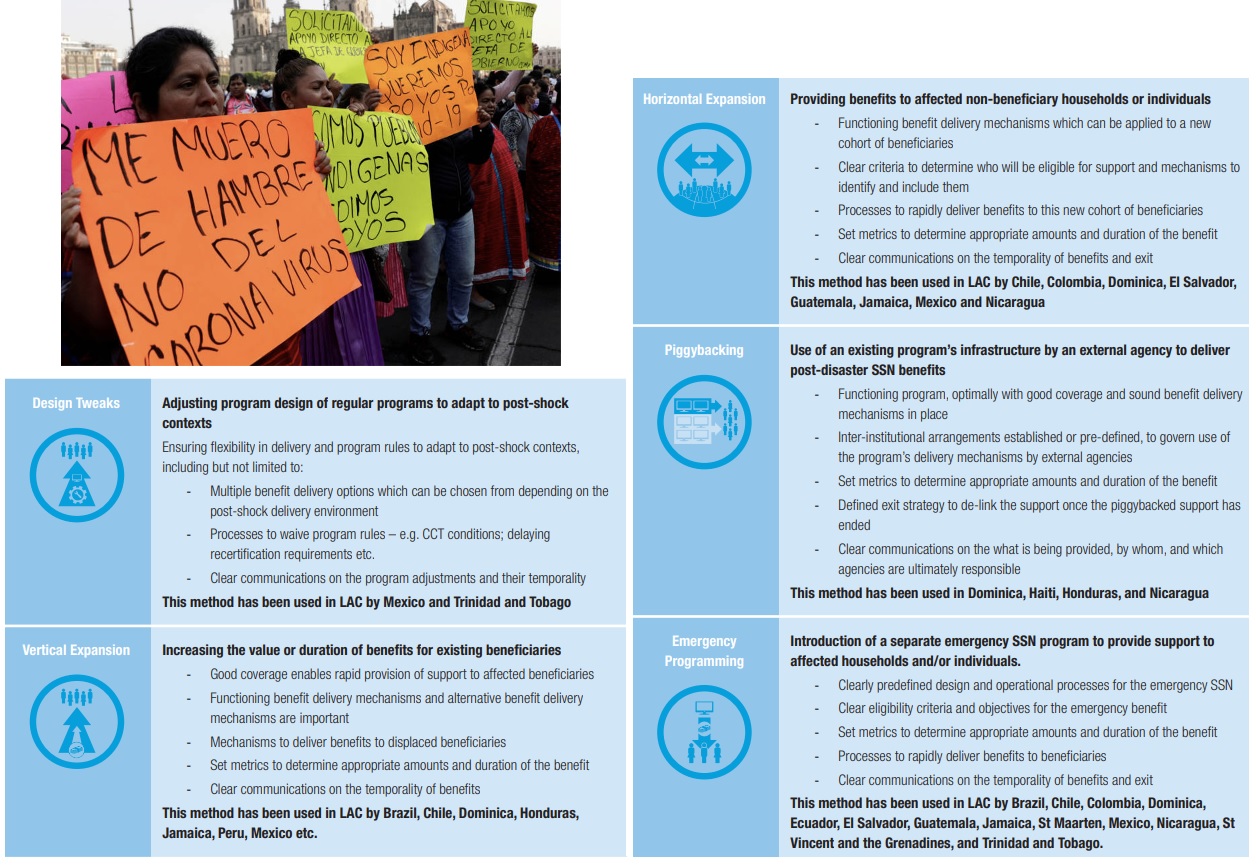 As Covid19 ravages Latin American countries, a collection of regional guidance notes led by Williams et al offers a precious tour of the issues to making social protection ‘adaptive’ to crises. Framed around climatic risks, there is a lot of relevant ‘lateral learning’ for Covid: this includes practical tips and experiences organized across a synthesis note, an overview on tailoring an adaptive approach to LAC, conducting post-disaster benefit assessments and eligibility determination, adapting information systems, considering social work, and layout put mechanisms for risk financing.

From macro crises to micro tensions: can cash transfers strengthen social relations? Here are two new contrasting cases: Garcia and Cuertas show that in Colombia transfers increased the probability of receiving informal support from others by 10 percentage points; but in Indonesia, Sumarto finds that the 2006 BLT cash program sparked community conflicts and protests in 651 villages, with social divisions caused by administrative practices and mistargeting: “… those who did not receive BLT distrusted not only community leaders but also BLT recipients, because they perceived that the recipients had colluded with community leaders” (p.6).

… and back to the macro, pandemic crisis! A UNDP report by Molina and Ortiz-Juarez simulates the cost for a “temporary basic income”, a cash transfer between 1-9 months targeted to 2.78 billion people living below the $3.2/day poverty line. Estimates are conducted for 132 countries and feature three transfer modalities: (i) a top-up to existing average per capita incomes that are below a vulnerability threshold that varies by region (and which is at least 70% above the poverty line); (ii) a transfer equivalent to half of countries’ median income/consumption; and (iii) a uniform lump-sum transfer of $5.5/day. The monthly costs of the three options for the sampled countries are $200 billion (0.27% GPD), $257 billion (0.35% GDP) and $465 billion (0.63% GDP), respectively – with of course large variations between regions. Bonus on finance: Kenny argues that donors’ “… seeming failure in solidarity with the world’s poorest countries (…) mirrors similar arguments about poverty and safety nets at the national level” (h/t Christy Lowe, Ian Orton and Paul Bance).

Let’s continue with crises, with two great resources on cash transfers in the humanitarian space! One is Development Initiatives’ Global Humanitarian Assistance Report 2020 (and its dataset): among its juicy findings, in 2019 only 1% of the $30 billion in humanitarian aid was channeled via host governments (the global WHS target is 25%). The other publication is CaLP’s State of the World’s Cash 2020 by Jodar et al: the report’s headline message is that since 2016, the volume of humanitarian cash and voucher operations doubled and in 2019 amounted to $5.6 billion, or 17.9% of global humanitarian assistance. Here “lack of engagement from national governments” was ranked among the “top 3 challenges” by 35% of the report’s survey respondents.

Speaking of governments… public “spending” is public “investment”! In South Africa, a WIDER paper by Kemp estimates that government stimulus has an economic multiplier of 0.11-0.32, with peaks over time between 0.36-0.78 (see also his useful literature review on cross-country evidence).

More on Covid19: again in South Africa (so much research on the country these days!), Arndt et al argue that Covid19-related impacts “… illustrate the value of having in place transfer policies that support vulnerable households in the event of ‘black swan’ type shocks”. And on the other side of the world, Edwards as an interesting short article connecting social protection, lockdowns and other Covid policies in the Pacific region.

Time for an Asian perspective! Bartell et al evaluate the nutritional impact of PDS food subsidies in India’s Andhra Pradesh state. What did they find? The PDS was positively, significantly associated with consumption of rice (30g/day) and sugar (7.05g/day). But this didn’t lead to improvements in stunting. Bonus: food assistance in the form of stamps or vouchers is frequently criticized (often for good reasons); but as a NYT piece argues, they keep playing a vital role when most needed (for very good reasons) (h/t Anit Mukherjee).

On another type of food… stick and carrot! In some cases, governments aim to increase job search via economic incentives that increase the gap between benefits and market income – in other words, the reduction of social protection benefits is used as a job activation incentive. Did this work in Denmark? Hussain et al suggest that’s clearly not the case: “… the affected people became poorer [since] joblessness was not due to lack of incentives”.

More on jobs, with two hot topic questions: what if Venezuelan migrants in Ecuador would obtain employment that matches their skills, such as via conversion of education credentials? Olivieri et al estimate that Ecuador’s GDP would grow between 1.6 and 1.9%; and what happens if female job seekers receive support in applications and onboarding for factory jobs in Ethiopia? Tefera et al show that their incomes go up 30%, but health deteriorates.

Final mix: can social media spread protests? Yes, find Arezki et al, and across countries: “… social media penetration in the source and destination of protests leads to protest spillovers between countries”; FAO launched a geospatial data platform on food, agriculture, natural resources and several other stats; and congrats to Sam Hickey for being elected president of Development Studies Association.