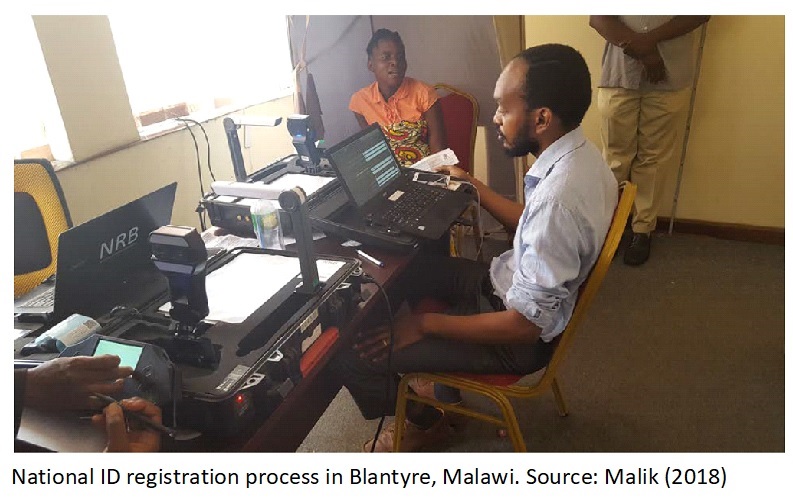 Let’s kick off with social protection in Africa. Malawi is the subject of two fascinating papers tracing the history of IDs and cash transfers in the country. On the former, a CGD note by Malik chronicles how the country managed to achieve universal ID coverage in 180 days with the assistance of several development partners. Particularly innovative features of the experience include the points-based approach towards determining citizenship and the rapid development of a digitally skilled workforce to carry out mass registration. In terms of cash transfers, Lara Arruda has an interesting IPC working paper examining the course of Malawi’s Social Cash Transfer Program. In doing so it reviews the various documents that led to the program (see table 1, p.5), maps out the universe of social protection programs in the country (see fig.1, p.6), discusses the evolving targeting process (p.9), and the district-level state in coverage, donor funding and status of scale-up (p.10). The conclusions point to a range of challenges around fragmentation, such as multiple registries, and the need to enhance national ownership possibly by reallocating funds from the input subsidy program. The paper is also condensed into a handy one-pager, alongside similar summarizes on Libya, Morocco, and Oman.

Can conditional cash transfers reduce the risk of violence and HIV infection? Yes, by 34% over a year according to a JIAS article by Kilburn et al. Their experiment targeted to poor South African adolescent girls in high school. In contrast to other studies with older women, they do not find that the cash works through changing power dynamics within existing partnerships; rather, the effect was boosted through young women choosing not to engage in sexual partnerships. Furthermore, there was a remaining direct effect of the CCT on physical IPV, or intimate partner violence.

Speaking of ownership, a new ESID working paper by Buur and Salimo examines the political economy of social protection in Mozambique (BTW, you may recall earlier ESID papers tackling the question in Ethiopia, Kenya, Uganda, and Zambia). While over 90% of the budget allocated to social protection comes from the state budget, the paper argues that such domestic support emerged as a mechanism to overcome social protests after the 2008 and 2010 riots. In a Brookings piece, Ingram and Papoulidis discuss USAID’s ‘self-reliance’ approach. Indeed, USAID’s ‘Journey to Self-Reliance’ is an effort to help country partners eventually handle their own development challenges without foreign assistance, with USAID measuring capacities of government, civil society, citizens, and business to support this commitment. Bonus: in an IDS note on cash transfer assessments in six African countries, Holland et al. discuss the design of a qualitative module that used participatory methods to integrate quantitative and qualitative data.

Let’s move to nutrition. An FNB article by Gillespie et al offers several insights from the ‘Transform Nutrition Research’, an initiative focused on high-burden countries like India, Bangladesh, Kenya and Ethiopia. Among the key highlights, they argue that “… in and of itself, social protection has little effect on improving children’s nutritional status”. In both Bangladesh and Ethiopia, although providing food and/or cash improved household food security, it had no effect on chronic child undernutrition. However, once linked to ‘BCC’, or behavior chance communication measures, transfers improved women’s nutrition knowledge, and enhanced their status within their homes and communities. In an IFPRI discussion paper, Yamauchi and Larson show that in Indonesia, soaring food prices in 2007/08 had a significant and negative impact on child growth among households that did not produce food for home consumption.

Since BCC or accompanying measures were mentioned… a blog by Costa and Gerard made me think of implications for questions around conditioning social assistance. They argue that policies are typically assessed by comparing the social gains from changing behaviors (e.g. addressing the externalities from energy use), to their private costs (e.g. the loss in comfort from using less energy). But the possibility of ‘hysteresis’ is often assumed away – that is, a policy may affect choices persistently even if it is no longer in place. Yet, a growing body of research documents that temporary policies can have persistent effects on a range of behaviors (e.g. nutrition in the first 1000 days, etc.). See full paper here.

Several resilience and crises-related materials. A FS article by D’Errico et al estimated and tested the Resilience Capacity Index (RCI) in Tanzania and Uganda. In both countries, the most important dimension contributing to household resilience was adaptive capacity, which in turn depended on the level of education and on the proportion of income earners to total household members. Furthermore, household resilience was significantly and positively related to future household food security status. Finally, households featuring a higher resilience capacity index were better equipped to absorb and adapt to shocks. CaLP released the workshop report from the ‘tracking cash and vouchers’ event in June. It offers a set of useful nuggets, including acknowledging a longstanding issue in humanitarian transfers that “… in practice, all unrestricted cash transfers are essentially multipurpose (i.e. they can be spent on anything, subject to availability, potentially serving multiple purposes). To that extent there is some a redundancy to the ‘multipurpose’ categorization”. In a FP2P guest blog, Datta shares his reflections on the Nepal earthquake response. Among the takeaways, he thinks that, in the first days and hours after a major natural disaster, expert advice matters more than evidence. More reflections, this time with a set of three ODI opinion pieces on the Rohingya crisis by Bryant, Holloway, and Wake.

Assorted mix! An article by VanHeuvelen has attracted loads of media attention by showing a robust link between union decline in the United States and rise of wage inequality over the period 1973-2015; Heyward reflects on the PDIA experience of improving learning outcomes in Indonesia; Simon Maxwell reviews “Advancing Human Development: Theory and Practice” by Frances Stewart, Gustav Ranis and Emma Samman. He writes that out of the 220-page volume, “… the sting (…) is in the last five pages”, with key takeaways being that “…. measurement through the Human Development Index is imperfect and incomplete (as the designers always emphasised); growth and human development are interdependent; and there are no recipes for success, except that over-emphasis on either growth or social development should be avoided”.

Finally, the annual UBI event of BIEN is underway in Finland – agenda is available here, while a webstream of select sessions can be watched here.