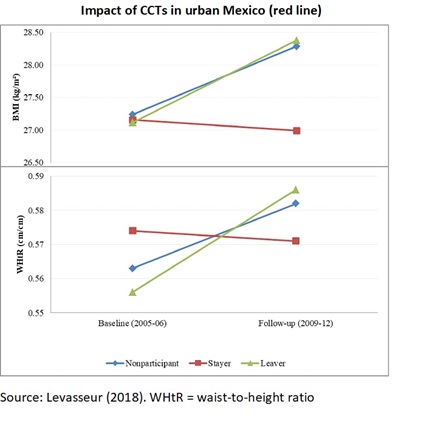 Let’s kick off with the nutritional effects of transfers. Can conditional cash transfers reduce obesity? A WD article by Levasseur examines the question in urban Mexico: results show a mild decline in adult body mass and waist-to-height indexes, but substantially prevented further increases in obesity – in other words, CCTs kept obesity levels stable, while they increased among non-participants (see figure above). Still in Latin America, Iannotti et al show that in Ecuador, providing children of 6-9 months of age with one egg per day for 6 months reduced the prevalence of stunting by 47% and underweight by 74% (h/t Berk Ozler). An article by Roth et al shows that population-representative data on Vitamin-D status in low and middle income countries is often limited (h/t Lawrence Haddad). This may require proxy indicators of the population risk of vitamin D deficiency, such as the prevalence of rickets (e.g., >1%) or metrics of UVB exposure. According to the authors, food fortification and/or targeted vitamin D supplementation programs should be considered where such deficiencies emerge.

Interesting findings and reflections on Community Driven Development (CDD) from a new NBER paper by Casey et al: based on experimental evidence from Sierra Leone, the paper shows that CDD structures offer a powerful vehicle for disbursing cash in complex situations; but they fall short of building inclusive institutions, leaving skills and potential within communities untapped (e.g., for writing grant proposals by talented youth instead of village leaders). In a nutshell, use CDDs to disburse cash, not to ask for it. BTW, Disasters has a special issue on the ‘double burden’ of natural shocks in conflict areas.

What about informal provisions of social protection? Based on empirical studies in 30 districts in six African countries, a DPR article by Awortwi makes the case that highly localized grassroots models with no state support may not be perfect, but are probably the best fit for implementing an all‐encompassing social protection policy in Africa. The challenge for policy, he argues, will be to harness this potential—not by trying to turn grassroots organizations into something they are not, but by supporting what they already are.

Still on Africa: forecasts indicate that by 2030, poverty will be almost exclusively concentrated in the region (9 in 10 extremely poor people will live there). Indeed, the Bank’s PovcalNet platform just released new poverty estimates indicating that in 2015, 10% of the global population lived on less than $1.90/day (h/t Shanta Devarajan). Further details on the update can be found in this technical note. See also Ravallion’s post, where he shows that global progress against poverty is not being shared enough by the developing world’s poorest: “… they are not exactly being “left behind” but pretty close to it”.

Moving to Asia, Thailand is often touted a premier case in pursuing universal health coverage. But what about informal sector workers with no social protection and high out-of-pocket expenditures for severe illnesses? A WD article by Neelsen et al shows that formal non-contributory health insurance financed by general revenues, combined with informal insurance of the residual risks, would appear to be reasonably effective in protecting living standards from the economic impact of illness. Indeed, they argue that “… [t]his hybrid represents a realistic target for the initial development of social protection against health risks in countries with a large informal labour market that makes comprehensive social insurance infeasible”.

Lee et al have a short Vox piece on the effects of mobile transactions in Bangladesh (see full paper). Overall, the share of Bangladeshi making digital and mobile phone payments rose from 7% to 34% in just 3 years. Yet many can’t use such technology: hence the authors’ RCT provided training on sending remittances, translated phone menus, and facilitated account sign-ups (the training cost about $12 per family). The result was an increase in mobile money usage from about 20% to 70% of the sample. Interestingly, however, migrants to urban areas were more likely to report declines in physical and emotional health, consistent with pressures to work longer hours and increase remittances enabled by the mobile banking technology.

More on tech in South Asia: a CGD piece by Gelb and Mukherjee provides new insights on Aadhaar implementation in India. Based on survey work in Rajasthan (read the specific summary and paper) and Andhra Pradesh, they show that despite all the technical sophistication of Aadhaar authentication, there is still a need to have a “human failsafe option” to ensure that beneficiaries are not excluded from accessing their entitlements. For example, in AP the Village Revenue Officer is responsible for authenticating legitimate beneficiaries who face problems with the digital systems, and initial results suggest that this backup is working well. As such, they stress that inclusion is as much about technology as it is about the ability of individuals and institutions to work with new digital systems. BTW, the supposed recent hacking of Aadhaar has been contested, see here and here (h/t Robert Palacios & Manjula Luthria).

Some interesting resources on social protection and non-standard employment (e.g., temporary and part-time employment, triangular agency work, and ‘disguised’ employment). A paper by Apella and Zunino shows that over the last two decades, the prevalence of NSE in wage employment has been generally stable in LAC countries, while less homogeneous Eastern Europe and Central Asia. They also find NSE workers to be a heterogeneous group (with improvements in educational levels, increases in nonroutine cognitive tasks, and less manual ones), leading them to conclude that “… [NSE] contractual agreements do not grant workers the same level of rights and protection as those provided to workers with standard work contracts”, hence calling for “… steps to strengthen social protection. That is, a universal social protection floor should be guaranteed”. In high-income settings, a policy brief by the OECD show that NSE is a much wider phenomenon: one in six workers is self-employed, and one in eight is on a temporary contract (h/t Michal Rutkowski). Also in this case, there are calls for making social protection more universal (i.e., untying it from the employment relationship), offering voluntary protection to non-standard workers, and harmonizing rules for standard and nonstandard work.

Speaking of jobs, a Brookings report by Signe looks at the present state of manufacturing in Africa (relatively limited), and presents brighter outlook for the future – one where business-to-business spending in manufacturing is projected to reach $666.3 billion by 2030, $201.28 billion more than that it did in 2015. As such, Africa could potentially capture part of the 100 million labor-intensive manufacturing jobs that will leave China by 2030.

What happens when migrants are allowed to vote? A recent IZA discussion paper by Chevalier et al analyzes how immigration causally affects redistribution in a setting where immigrants are granted immediate voting rights. Exploiting a historical episode of mass migration to post-war West Germany as a natural experiment, the paper provides evidence that the inflow of poor immigrant voters led to a more generous welfare state and had a lasting impact on preferences for redistribution.

A couple of resources on crises: who are the countries most exposed to international food price shocks? According to a new JDS article by Elleby and Jensen, middle income are more vulnerable than low-income countries as their structure potentially transmits prices more directly to poor consumers. Since I mentioned food, a blog by Hossain argues that while food riots kicked off when global food prices shot up in 2008 and 2010-11, fuel protests tend to respond to distinctly national political events (e.g., cuts in subsidies) rather than international market prices (see IDS working paper by Hossain et al shared in the summer).

Let me conclude with two book reviews: Maxwell discusses “Trumped-Up Aid and the Challenge of Global Poverty” by Tony Vaux, while Barrett examines our edited volume “The 1.5 Billion People Question” on food subsidy reforms (quite a flattering review, thank you!)