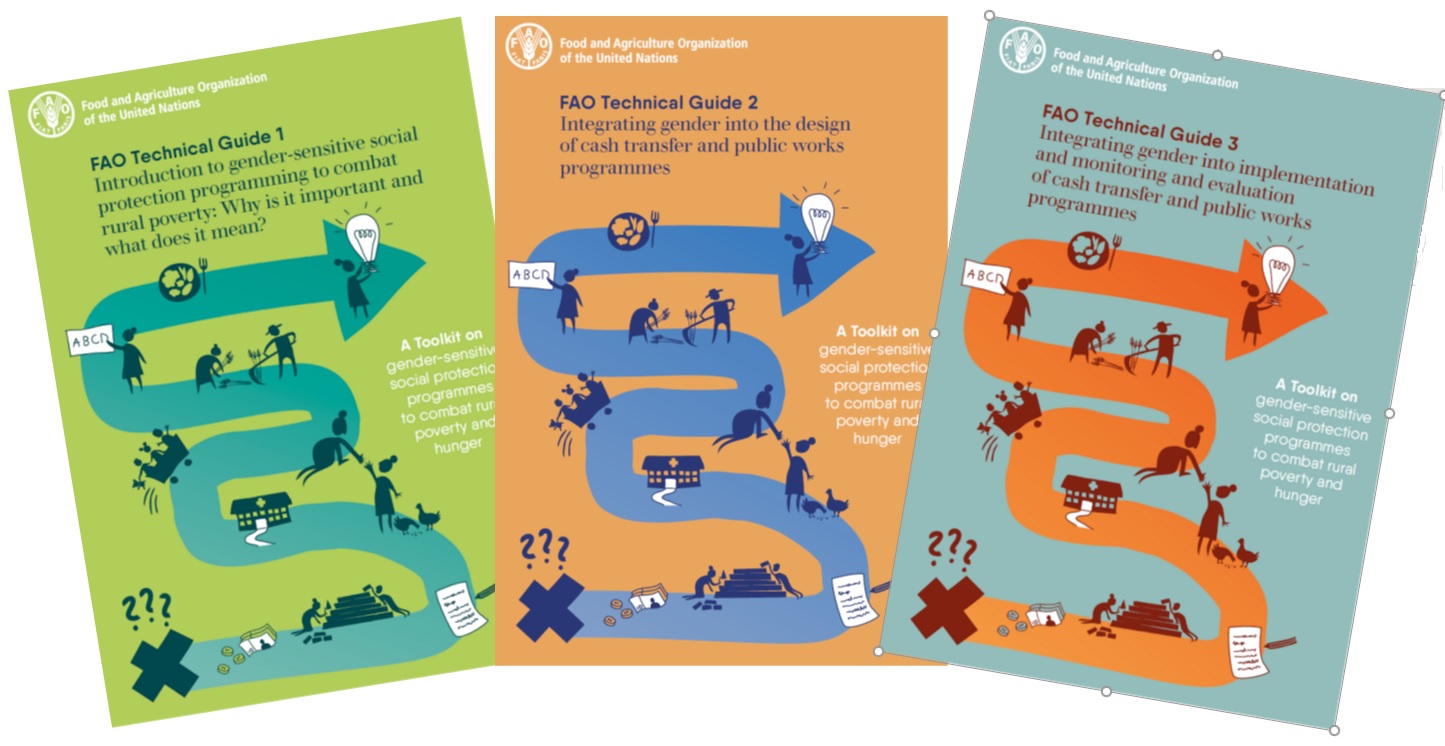 One of the best toolkits I have seen on the matter! FAO has produced a juicy guidance package on gender-sensitive cash transfers and public works. This comprises an introduction, a technical guidance note on design, and another on implementation and M&E – all offering specific tips by intervention, plenty of in-depth practical examples and short case study illustrations (e.g., see design note’s examples of Afghanistan p.19, targeting p.32 or Egypt on p.38, fantastic stuff), and final checklists and resources.

Since I mentioned Afghanistan, what’s new in Asia? IPC and UNICEF released a comprehensive stocktaking of social protection programs in 19 Asian countries. A total of 135 programs were found to provide cash transfers, 37 provide in-kind food, and 66 offer other types of benefits (services or other in-kind goods) – all of which were nicely catalogued with a one-page fact-sheet. Most of the social assistance in the region is unconditional (about 80% of total), categorically targeted and directed to children.

Speaking of children… a study by Lebihan and Takongmo investigates the impact on obesity of the Canadian universal child grant (UCG) for all children under 6 years of age (h/t Amber Peterman). They show the program caused decreases in body mass index and the prevalence of overweight in mothers with young children (but no effect on fathers). They also report larger changes at the upper tail of the distribution of BMI in both lower-educated mothers and single moms. Also, Gelders simulates the impact of a similar UCG intervention in Indonesia, while McClanahan discusses multi-tier child benefits more globally. Bonus: an oped by Sachs makes the case that ending child poverty is within reach.

Cash transfers can influence inter-temporal decision making. Based an experiment of the Monze cash transfer program in Zambia, Handa and Seidenfeld evaluate the impact on beneficiaries’ “willingness to wait” for financial rewards. Specifically, they asked beneficiaries a series of hypothetical questions on whether they prefer to have a certain amount of money now or a different (higher) amount in the future. They found that cash transfer make people more willing to wait for future money. This is because people are slightly better off than controls with regards to health and happiness, and significantly more optimistic about the future (28% vs 17%). Such subjective wellbeing in turn influences expectations for the future and ‘time preferences’, a key factor in economic development models.

How would the largest form of cash transfers, a UBI, look like in the US? An NBER working paper by Hoynes and Rothstein shows that a UBI would direct much larger shares of transfers to childless, non-elderly, non-disabled households than existing programs, and much more to middle-income rather than poor households. A UBI large enough to increase transfers to low-income families, however, would be enormously expensive (pending on design, between $1.5 and 3T/year).

Let’s take a look at the politics of social protection: a WD article by Das and Maiorano analyzes the politics of India’s NREGA program in Andhra Pradesh. Using regression analysis, they find that the ruling party does not use the program to buy votes neither in swing, nor in core areas of support. Instead, the political distributive strategy seems to revolve around contractors, that is, compressing job generation in core constituencies in order to expand expenditure on materials needed for the execution of the projects. In this way, the ruling party can channel resources to contractors, who fund the electoral campaign of the party in return. In Ghana, a new ESID paper by Abdulai explores the interactions between domestic constituencies, particularly elite groups, and the donor community in shaping the LEAP program. Bonus on state and politics: Khemani reflects on the nature of state capacity, and how it differs from that of other organizations.

Moving to MENA… a fascinating report by the World Bank explores the economic and social dimensions of displaced Syrians. This includes conditions both within and outside Syria, as well as return simulations. Social assistance features among the key themes covered (p.115). For instance, it shows that the number of individuals receiving cash assistance increased to 1.85 million individuals in 2017 from just over 400,000 in 2014. In 2018, 582,000 families, approximately 2.9 million people, were targeted for cash assistance, while 2.3 million were targeted to receive food assistance (cash, voucher, or in-kind).

More on crises, but in LAC: Mercy Corps compiled and reviewed over 50 reports on cash responses in Haiti, with a special focus on those related to Hurricane Matthew.

Perhaps some good news for domestic financing of social protection: do tax increases always hurt the economy? Not always according to a Brookings blog by Gunter et al (see also full working paper) (h/t Shanta Devarajan). In advanced economies, the ‘tax multiplier’ —how GDP responds to government changes to taxes – is generally negative. What about low and middle income countries? They found that on average the rate is negative (-1.7), by change in output associated with increasing revenues by $1 tends to be zero for low levels of initial tax rates and small tax changes, and becomes more negative as the initial tax rate and the size of the tax change increase (see figure 1, it’s a gem!). The key implication is that for most Southern Africa countries, India, and East Asian countries, an increase in taxes would likely not come, after 2 years, at the expense of growth (see map in figure 2).

Finally, some additional insights on financing social protection: an OECD paper by Castel and Pick shows that in Vietnam, social insurance coverage amongst SMEs has almost doubled over the past decade, but remains relatively low (33.5% of them participated in social insurance in 2015). About 83.9% of firms that do not participate in social insurance are household businesses with fewer than 10 employees, while all firms with 200 or more employees cover all or part of them. The study also finds that enterprises with covered employment have a greater tendency to make informal payments. This is because of (i) difficulties in complying with government regulations and (ii) competitive market pressures. In fact, social contribution rates increased by 10.5 percentage points in less than a decade (from 22% to 32.5%), and the minimum wage also soared several times. This resulted in a 9% increase in formal labor costs.