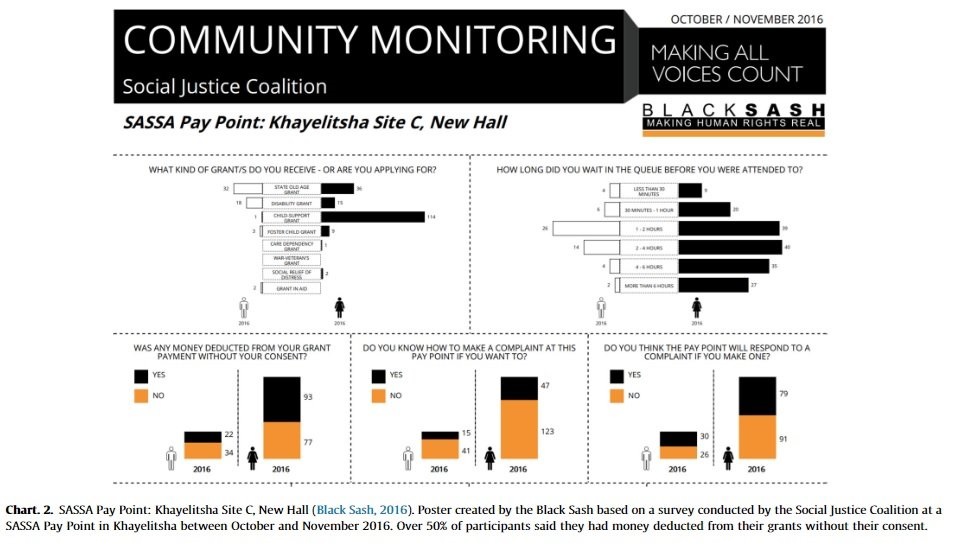 Since I was in Africa last week, let me begin with materials on safety nets in the region! So here is a cautionary tale on the relationship between cash payments and financial inclusion: a bombshell paper by Torkelson documents that in South Africa, cash transfers were used as loan collateral by a financial company delivering cash itself. In other words, payment actors encouraged loan uptake by elderly and disabled beneficiaries (against future grant payments), deducted grants without their consent (in some cases affecting over half of beneficiaries, see above figure), and ultimately worsened people’s indebtedness levels (with no risk of default for the lender). After a massive public outcry, the contract with the firm ended in 2018.

Another important contribution to the long-terms effects of cash transfers: a paper by Dietrich et al shows that after 10 years, cash transfers under the SAGE scheme in Uganda reduced underweight (by 1.5 percentage points) and increased schooling (by 0.01 years per individual). Yet, in the education realm program costs exceed benefits, leading to negative rates of return over time (likely because of limited supply-side investments in schooling). In terms of program types, social pensions do a little better than the poverty scheme due to more generous transfers and the three-times lower administrative costs.

More on social pensions: an article by Chepngeno-Langat et al examines the effects of those programs in Nairobi’s slums. This finds that 40% of beneficiaries redirect cash toward grandchildren or children, with a high proportion of them living in rural areas. This highlights the role played by older people, even the most vulnerable, in providing support to wider informal networks. Bonus: Kabairu et al reflect on lessons from a social pensions pilot program in Tanzania.

Let’s step back for a second: are you wondering how is social protection spreading across Africa? It’s not yet a classic, but a soon-to-be one: check out Hickey et al’s amazing book on the political economy of cash transfers in the region… now open access! (A more extensive review is in the pipeline). Another present from WIDER: also the super-classic 1989 Hunger and Public Action volume by Dreze-Sen is now accessible for free.

From past to future… how will mega trends in data protection, identification, financial integration, technology and other drivers affect humanitarian assistance? IARAN and CaLP have a report laying out scenarios and exploring implications for governments and private sector.

Zooming into a key global trend…. FAO has a crisp pamphlet connecting social protection and climate change (h/t Natalia Winder-Rossi). Among the salient points, the piece underscores the lack of awareness across sectors of each other’s roles and responsibilities, hence inhibiting operational synergies between disaster, climate, environmental and social protection actors. But it also identifies a range of opportunities, with Brazil’s Bolsa Verde program, for example, delivers payments for ecosystem services using CCTs.

From Brazil up to the United States, with Blagg et al examining the knock-on effects of proposed harsher SNAP eligibility rules: not only over 2 million people with children would forgo an average of $240-worth of SNAP per month, but over 1.1 million low-income children could lose access to the national school meals program in full or in part.

Who said that public works in high income countries don’t work? This week’s labor and skills corner, a partnership with Indhira Santos and Michael Weber, starts with Ivanov et al analyzing the effects of a German job creation scheme on the social integration and welfare among long-term unemployed individuals. They find significant positive effects, with these being larger for those with health impairments and above-average duration of welfare dependence. The program’s relative effects decline over time, a trend driven by a rising share of non-participants (controls) who find a job and catch up with program participants.

… and what about wage subsidies in contexts of high informality? Novella and Horacio Valencia evaluate the effectiveness of a job intermediation and wage subsidy program in Bolivia, finding that it substantially increases employment, formality, and earnings.

… and no news on multifaced, “cash plus” interventions? Of course there is some: Carneiro et al evaluate an integrated program for 3,600 mothers in Northern Nigeria, including (i) information on pregnancy and infant feeding practices and  (ii) monthly unconditional cash transfers from pregnancy until the child turns two. What happens after 2-4 years? The program reduced stunting by 8%! How? Information matters, while regular cash flows allowed investments in livestock. These are both a source of protein rich diets for children, and generate higher earnings streams for households long after the cash transfers expired.

More on wages: a couple of weeks ago, I shared Dube’s review of minimum wages in high income countries, basically finding no effects on employment (see here). However, a new compilation of evidence on minimum wage in low and middle income countries by Neumark and Corella points to a different direction: “… when minimum wages are binding and enforced, and when they apply to vulnerable workers, the disemployment effects are most apparent”.

Can a sudden shock in labor supply encourage innovation? A paper by San finds that the abrogation of the Bracero agreements between the US and Mexico in 1964 – which caused a drop in one-fifth of the seasonal labor force for select crops – induced a sharp increase in innovation and technology in crops that were more exposed to the Bracero program relative to less-exposed crops.

From the US to Europe! Based on a new report on the role of institutions, a piece by Banerji’s discusses, among other themes, the economic mobility of low-income households in the continent: the poorest have been more likely to see their incomes rise with economic growth than have the middle class; but they are also less shielded from the consequences of contraction, i.e., their incomes fell by 25%, twice that of the average household.

Two resources on unemployment: Miller and Pavosevich review current experiences with assigning unemployment insurance tax rates to employers, and propose methods new methods based on employment or payroll variation such that growing firms would have lower taxes. And in Australia, Gerards and Welters show a ‘scrambling for jobs effect’, whereby liquidity constraints intensify job search among the unemployed, but without improving short‐run employment outcomes or job quality (if a job is secured).

Non-standard employment and an increased career fragmentation have reignited interest in ‘individual learning accounts’ to make training rights ‘portable’ across jobs. A report by the OECD reviews their pros and cons and key design choices. It finds that those schemes have a poor track record with low-skill workers – i.e., they need to be simple to navigate, require effective face-to-face information as well as advice and guidance to convert training rights into valuable training outcomes.

More on economic crises: a study edited by Kose and Ohnsorge takes stock of lessons a decade after the global recession, arguing that countries are less prepared today in weathering a global crisis than they were in 2009. This appears to echo the main message of Ortiz and Cummins’ update of their 2012 ‘austerity paper’ on government spending during crises. In ‘unpacking the move from fiscal stimulus to contraction’, they surveyed a number of social protection measures (or cut thereof) currently underway – for example, rationalizing spending on safety nets is considered by 77 countries; eliminating or reducing subsidies is envisioned by 79 governments; and 73 nations are revising consumption-based taxes (VAT).

The above sobering findings naturally lead us to equity matters: Rodrik and Blanchard reflect on a recent conference on inequality (PPTs and videos from the event itself were shared in a past edition, see here to ease reference). One of my favorite parts is when they frame which segment of the income distribution policies seek to “fix” – those that target the bottom of the distribution, lift incomes of the middle class, or reducing/taxing incomes at the top.

And what about poverty issues? While there is trepidation for the unveiling of India’s national survey data, official figures haven’t yet been released; but some findings start leaking out: according to a Business Standard piece, in 2017-18 consumer spending fell in real terms for the first time in decades (by 3.7%). But who are the world’s multidimensionally poor? Aguilar and Sumner show they are largely the youth, mostly residing in rural areas, though not necessarily working in agriculture.

Final fireworks: Barrett and Carter revisit their 10-year-old paper on RCTs and set out a number of new considerations (like them, I am fond of having an ex-ante theory within which running experiments); in celebrating the 30th anniversary of the UN Convention of the Rights of the Child, Roelen has six stories of how anti-poverty programs help children in Haiti; and the 3rd annual Jobs and Development Conference will take place on May 21-22, 2020, in Warsaw, Poland (with call for papers in early December).