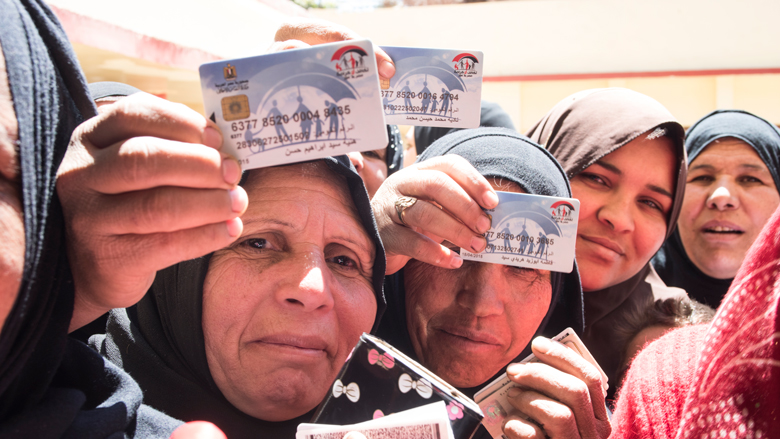 Breisinger et al unveiled the impact evaluation of Takaful, the Egyptian flagship conditional cash transfer program. The evaluation package includes IFPRI’s brief, summary, and detailed quantitative and qualitative analysis. The program generated a number of positive impacts, such as increased consumption (by up to 8.4%); increases in dietary diversity and spending in education-related items (school supplies and transportation); and led to a reduction of 3.7 percentage points in the likelihood that a child under 5 years was ever treated for malnourishment. Effects on women empowerment were more mixed. Overall, nearly 90% of beneficiaries are satisfied with the program (70% are ‘very’ satisfied). The incidence of the CCT is progressive, with 67% of current beneficiaries being in the lowest two quintiles. However, overall coverage of the poorest (participants and not) is low, with only 30% of people in the poorest 40% participating in the program (a challenge particularly acute in urban areas). Among excluded applicants, the qualitative analysis revealed a high degree of unawareness of reasons for application rejection, which resulted in perception of targeting fairness being higher among participants than non-beneficiaries.

From MENA to South Asia: a new WD paper by Asri examines the performance of social pensions in India. Evidence shows that from 2004–05 to 2011–12, program performance improved: obtaining access to social pension in 2011–12 is 10.6 percentage points more likely than in 2004–05. As individuals become older, the likelihood of receiving a social pension increases with each year by 0.3 percentage points, and holding a BPL card increases that likelihood by 6.7 percentage points. However, targeting errors continue to be high. The exclusion error reduced substantially from 92% to 74%, and the inclusion error from 57% to 41%.

… from South to East Asia: Han and Gao evaluate the targeting performance of rural Dibao in China. Although the central government stipulates its poverty targeting to be based on means testing, a decentralized community-based targeting (CBT) approach has been used widely in rural Dibao’s implementation given the challenges in measuring household income accurately in rural settings. Six results emerge: (i) when based solely on income poverty measures, rural Dibao’s targeting performance was limited; (ii) local communities in rural China considered multidimensional poverty-related factors in their determination of Dibao eligibility; (iii) when based on multidimensional poverty, Dibao’s targeting performance was better than that based solely on income poverty; (iv) Dibao’s intra-village targeting accounted for more of its targeting performance than inter-village targeting; (v) political elite capture effects were evident in both Dibao participation and transfer value received; finally, (vi) the political elite capture effect from close relatives was larger in magnitude than that from household members.

A JID article by Porreca and Rosati analyses the effect of the CCT Pantawid in the Philippines and the unconditional cash transfer Child Grant Programme in Lesotho on labor supply. The transfers did not discourage youth and adult work. However, marginal adjustments emerged: the CGP decreased youth and adult occasional work, representing the mechanism of last resort to cope with income vulnerability; the Pantawid did not inﬂuence youth employment but increased adult wage work. The latter also showed a reduction of family work, indicating that the transfer decreased transaction costs associated with labor market access. These findings somewhat contrast with a DPR article by Ladhani and Sitter published critiquing CCT programs from a conceptual, implementation and evaluation standpoint, concluding that “… though it continues to be praised as an innovative practice, the jury is still out as to whether CCTs are a viable and sustainable means of social protection”.

Since I mentioned labor supply… results from systematic reviews of activation measures are often mixed and not always encouraging. But a new JDS compilation of studies in LAC by Escudero et al shed a more positive light on such measures. Their study examines ALMPs’ effects on employment, earnings, hours worked, and formality based on 296 impact estimates from 51 program evaluations. They found that “probabilities of being employed” is often positively affected by ALMPs. Moreover, ALMPs are more successful among women and youth, and when they are implemented during periods of economic expansion. Training programs increase both formal employment and earnings; training is particularly effective when it is more intensive and when explicitly targeting poor individuals.

Turning to public sector jobs, an interesting piece by Philip outlines the role of public employment programs as part of the future of work thread, including discussing effects around participation of communities and individuals, the creation of public assets and services, and the interface with the social economy. More on the future: apparently Berlin is considering a (kind of) basic income pilot a la Finland by testing unconditional benefits among 500 Hartz-IV beneficiaries (here in German) (h/t Scott Santens). BTW, why poor people are not always supportive of redistribution? Well, it seems that people think they are less poor than they actually are, according to a paper by Hoy presenting results from 16,000 respondents (with internet access) in India, Nigeria, Mexico, South Africa and Morocco.

New resources on crises and resilience: Hurlstone and Harvey produced a case study on Kenya’s Red Cross humanitarian cash transfers and their impact on financial inclusion. The projects appear to have contributed to an increased use of M-Pesa and survey respondents felt that it had contributed to stronger savings and better household cash management. Barret and Upton have an insightful conceptual note on resilience as an “… integrative, measurable concept for humanitarian and development programming”. The major UN agencies involved in humanitarian cash transfers have issued a joint statement featuring a renewed commitment to reduce parallel provisions, more coordination around a common cash system, and underscoring the primary role of governments.

Human capital! A lab-field-trial by Banuri et al on 400 health workers in Burkina Faso shows the complex incentives for reaching the poor relative to better-off people. Can cash incentives alter them? Yes, but, in the words of the authors, “… these must be larger than the user fees paid by the non-poor to fully offset the incentives of health care workers to see non-poor rather than poor patients”. Why not measuring malnutrition like we do with poverty? Juan et al present a new measure estimating the prevalence, gap, and gap squared for stunting, wasting, overweight, and underweight, using data from 94 developing countries over 20 years. Although in most cases the headcount measures and gap measures are moving in the same direction, in many other cases, they are moving in opposite directions (see table 2, p.15). Speaking of gaps, Agenor et al review the effects of policies aimed at mitigating discrimination against women in the marketplace on gender wage gap, decisions to invest in skills, the composition of employment and unemployment, and long-run growth.

Are you looking for an interesting book? Check out the anthropological perspective on cash transfers edited by de Sardan and Piccoli.