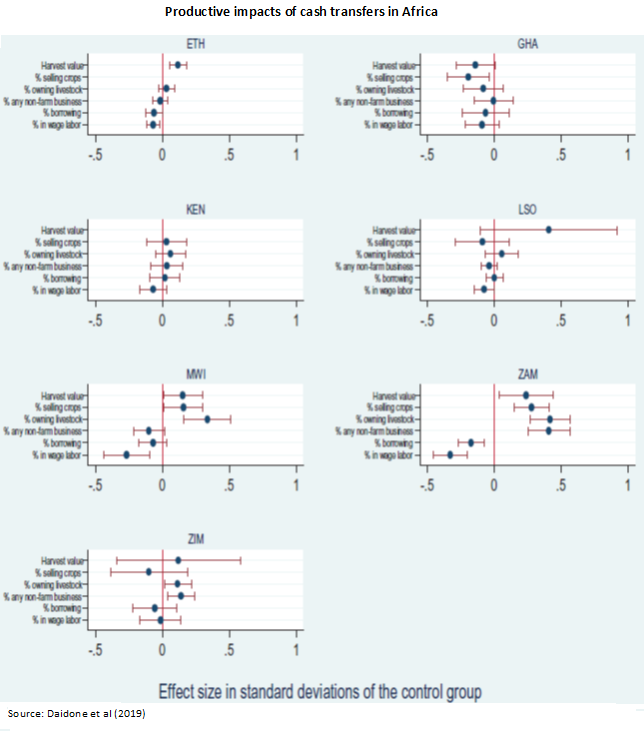 Are cash transfers a productive investment? Daidone et have a great AJAE article summarizing and explaining the economic effects of cash transfers in 7 African countries. Among the findings, one of the take-aways is the need to look across indicators. For example, in most cases, cash can reduce wage employment. But as the authors put it (p.18), “… agricultural wage labor [is] often a “refuge” sector, where poor households work to survive (…). A reduction in participation and time worked in these activities is suggestive of improved economic conditions”. In Zambia, for instance, such decline in agricultural wage labor is offset by significant increases of 20 days working on farm businesses. The article concludes by offering several insights into how design affects performance, including in terms of targeting, transfer value and predictability, and messaging.

More on labor supply: an EJDR article by Gassmann and Zardo Trindade examines the effect of means-tested transfers in the Kyrgyz Republic. They find that household heads are less likely to be economically active than similar nonbeneficiaries, while spouses are more likely to be so. This seems to lend support to the theory that additional income leads to intrahousehold reallocation of labor supply.

A somewhat sobering finding on cash transfers: based on a survey of 3,800 people in rural Bihar, a Brookings piece by Khemani et al asked whether people prefer cash or other services. The point is that framing matters – evidence shows that people like cash, but when offered as a choice between – or if it comes at the cost of – other public measures, results could vary. Only 13% of the sample chose cash if it came at the expense of spending on public health and nutrition; in contrast, if cash came in lieu of improving nearby roads, the share respondents choosing cash rose to 35%. A thoughtful reply by Evans underscores the need to distinguish between a general desire for effective services and an actual sense of the price for public provision of those services.

Speaking of Asia, a great set of microsummaries from the Pacific Development Economics conference, with social protection featuring in several papers. For instance, a paper by Srinivas et al shows that in India, increasing food subsidies by Rs70 would lead to labor supply reductions (by 3 days) – but private sector wage for unskilled workers increases. In the neighboring Bangladesh, 11 years ago a trial gave a one-off cash transfer to incentivize rural-to-urban migration. Long-run results are now in: did it lead to permanent migration? Yes, for 1% of the sample, according to a new paper by Chowdhuri et al. In the same country, a JID paper by Chowdhuri and Radicic shows an inverted U‐shaped relationship between asset accumulation and internal and international remittances – asset accumulation declines as remittances increase.

Changing subject, the official DAC humanitarian aid figures are out – volume was $15.3 billion in 2018, a fall of 8% in real terms, back to below 2016 levels. Such volume is dwarfed by the level of remittances in humanitarian crises which, according to an ODI report by Bryant, amounted to 52 billion in 2017. Tough choices for refugees: is it better live in camps with less income from jobs or self-settle with high rent costs? Interesting JMP by Ginn presents new evidence from Jordan and Iraq.

Speaking of jobs, Rodrik and Sabel invite comments on their draft paper ‘Building a good jobs economy’. A QJE paper by Cengiz et al on the effects of minimum wage increases in the US (1979-2016) shows no effects on employment (and disemployemnt). Also, the direct effect of the minimum wage on average earnings was amplified by modest wage spillovers at the bottom of the wage distribution.

New resources on human capital! A set of 8 handy infographics by ODI’s Manuel et al show that investments in human capital are not reaching the poorest regions and people. Lopez-Avila shows that in Colombia, early childhood interventions decrease parents’ use of physical disciplining, with mothers of children exposed longer to child care services using non-physical methods more often. And some fresh evidence on school feeding in India: a WD article by Chakraborty and Jayaraman estimates that exposure to midday meals for the nearly 5-year duration of primary school increases test scores by 18% for reading and 9% for math relative to children with less than a year of participation.

A report by Kidd et al reviews the types of social protection disability programs, their level of investment, coverage, impacts and a range of policy and implementation barriers.

Final assortment: An interesting blog by Ogden reflects on what to expect form research from financial inclusion. Goldberg lays out her vision on the future of development. And Devarajan makes an unapologetic call for growth.