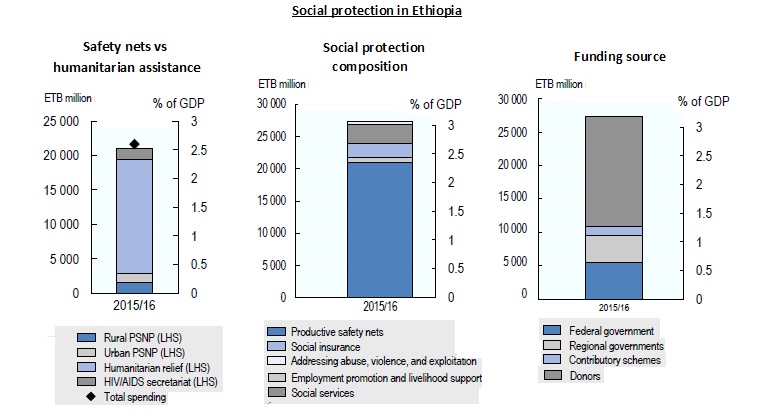 About 3 years ago, the US Congress commissioned a report on how to halve child poverty in the country in 10 years. The 600-page volume, edited by Duncan and Le Menestrel, is now out and contains massive amounts of cash transfers. In particular, it lays out 4 alternative program “packages” with different impacts and costs: (i) a “work-based package,” which increases the Earned Income Tax Credit (EITC), makes the Child Care Tax Credit fully refundable, boosts the minimum wage, and scales up training programs (cost = $9.3 billion/year); (ii) a “work-based and universal support package” ($44.3B); (iii) a “means-tested supports and work package” ($90.7B); and a (iv) “universal supports and work poverty reduction package” ($111.6B).

Turning to another form of cash transfers, Bando et al evaluate the effect of social pensions (Pension 65 program) in Peru. The intervention, which uses a poverty eligibility threshold, increased household consumption by 40% and improved subjective well-being by 0.17 standard deviations.

But can cash transfers reduce violence? Between 2011 and 2013, GiveDirectly provided unconditional cash transfers (UCTs) to 1,500 households for about $709 (corresponding to about 2 years of per capita expenditure) via M-Pesa in Kenya. An experiment by Haushofer et al shows that UCTs provided to women led to a 0.26 standard deviation (SD) decrease in physical violence, and transfers to men to a 0.18 SD decrease. Sexual violence was also reduced after transfers to women (0.22 SD), but not men. The authors also observe large and significant spillovers: nonrecipient women in treatment villages report a 0.16 SD reduction in physical violence.

Let’s discuss more gender issues with two papers on the effects of crises on women. A PLOS article by Low et al examines the impact of droughts in Lesotho. In particular, they found that adolescent girls and young women aged 15–24 years in rural areas of drought had higher rates of high-risk behaviors, such as early sexual debut and transactional sex, and had lower educational attainment. A working paper by Bandiera et al finds similar effects of Ebola on women in Sierra Leone. But their study also shows that an intervention established before the crisis – a club providing a “safe space” where women can find support, receive information on health and reproductive issues, and vocational training –enabled young girls to allocate time away from men, prevented out-of-wedlock pregnancies, and fostered re-enrollment in school post-crisis.

Speaking of crises, can large economic shocks affect the demand for progressive taxation? A paper by Limberg argues that among 32 countries, the Great Recession caused a general shift in tax policy preference, including higher demand for tax progressivity. The Disasters journal, managed by ODI, recently turned 40. To celebrate the anniversary, an article by Fiddian‐Qasmiyeh reflects on contemporary studies and practice in disaster response. BTW, an astonishing 60M people get precious help from food banks globally. How can this happen, in 2019, in rich countries, is bewildering. This first-hand account from a volunteer in the UK speaks for itself.

Demand for services can be strongly influenced by the payment modalities, not just price: a JDE article by Bauchet and Morduch shows that due to a software limit, sometimes premiums in life insurance in Mexico must be paid in full upfront rather than over time. When upfront payment is required, demand for insurance drops by 37–42%; and demand increased by 59–74% when customers could pay in weekly installments instead of in a lump sum, even though doing so was costlier for them.

What’s new on the jobs front? An NBER paper by Autor shows that in the US, urban non-college workers perform substantially less skilled work than decades earlier. This deskilling reflects the joint effects of automation and international trade, which have eliminated the bulk of non-college production, administrative support, and clerical jobs, yielding a disproportionate polarization of urban labor markets. He concludes that changes in the nature of work—many of which are technological in origin—have been more disruptive and less beneficial for non-college than college workers.

Moving to Africa, a WD article by Wegenast et al show that Chinese-controlled mines in the continent are associated with more local unemployment relative to non-Chinese mining operations. Also, citizens’ beliefs that Chinese firms are taking local jobs contribute to a negative image of China within mining regions. According to the paper, Chinese companies’ competitive advantage in the use of expatriate labor may explain the findings.

An interesting macro piece: how did low- and middle-income countries keep inflation in check over the past 45 years? A working paper by Ha et al summarizes their book on the topic (note: after peaking in 1974 at 17.3&, inflation in these countries declined to 3.5% in 2017).

Let’s round up this edition with the widely-circulated piece by The Economist: “[safety nets] in Africa can seem rather ropy and ad hoc. But they are gradually becoming less so…. The spectacle of an African government doing something specifically to help the poorest people… is novel”.